The Cape Henry Lighthouse at Virginia Beach was built in 1792 to watch over the shipping traffic in the south entrance of the Chesapeake Bay on the mid-Atlantic Coast. President George Washington himself was involved in the funding for this structure, and now the Cape Henry Lighthouse is a National Historic Landmark. Tourists may climb through this decommissioned lighthouse, which now stands proudly on the U.S. Navy Little Creek-Fort Story Joint Expeditionary Base East. 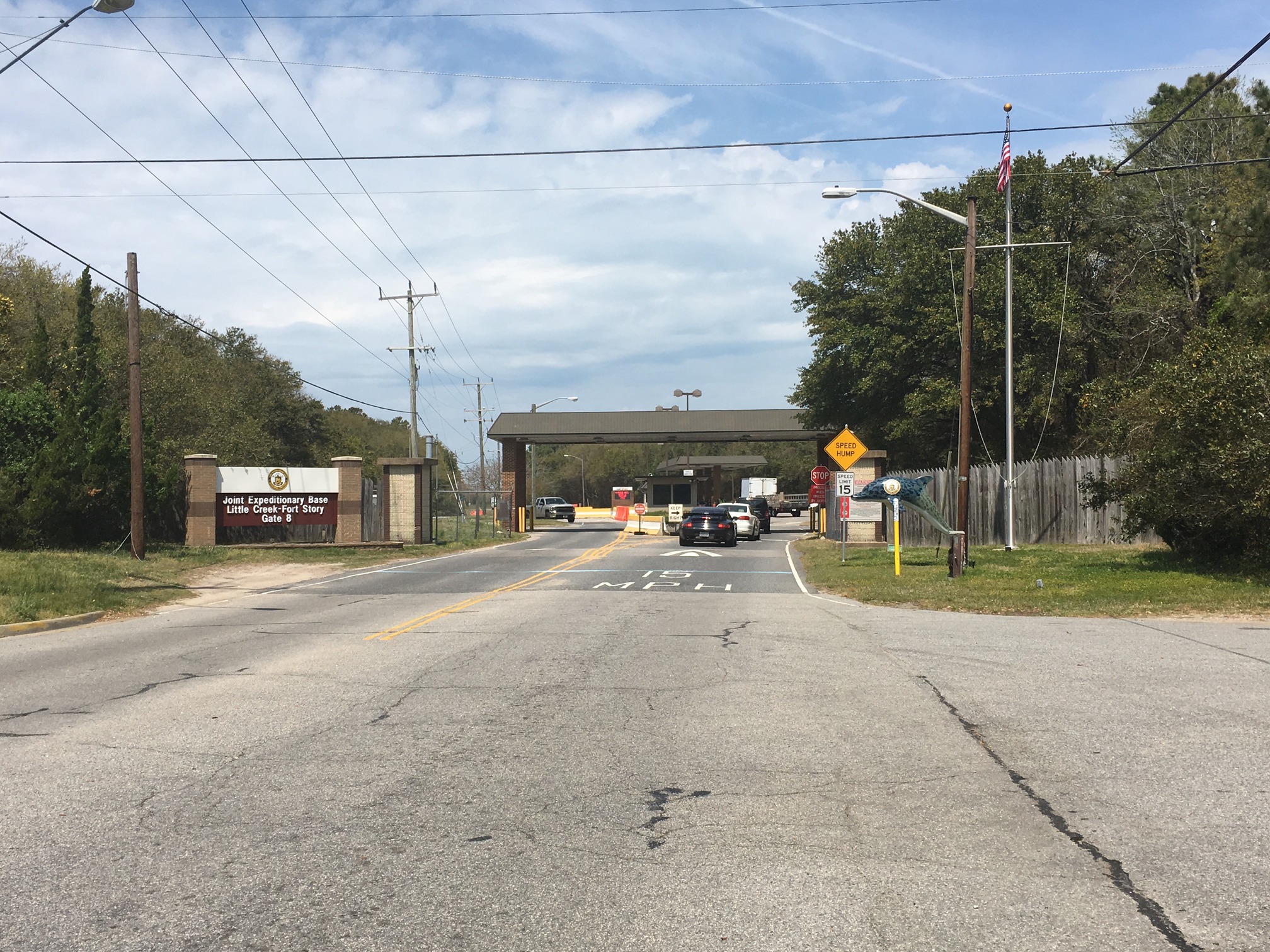 Getting to the Cape Henry Lighthouse is easy; it is located just east of Virginia's First Landing State Park, off Shore Drive/Route 60 at the intersection of Atlantic Avenue and a side street called 89th Street. (Atlantic Avenue, Shore Drive, and Route 60 run parallel up and down the Virginia Beach coastline.) Because the lighthouse is now part of a military base, visitors need to be aware of the security expectations for tourists entering the base to get to that lighthouse. 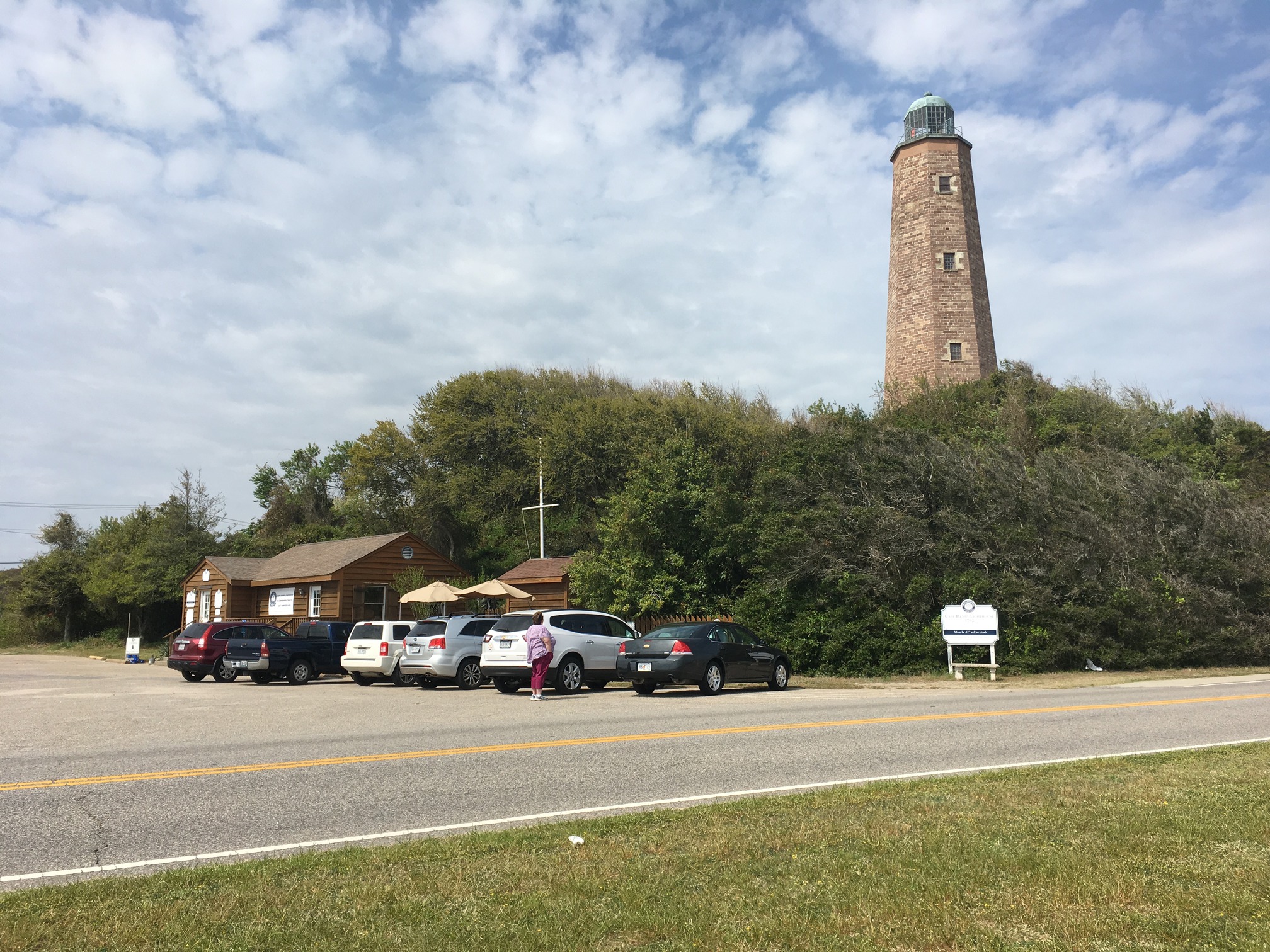 Getting to the lower grounds of the lighthouse requires a security check. Everyone in the vehicle age 16 and over must have state photo identification; visitors from some U.S. states may need passports in addition to a driver’s license. The vehicle will be searched thoroughly, including under the front hood; however, the guards on duty are very polite. (Check the visitors website prior to visiting for full details.) The full screening took about 15 minutes, with the driver being asked many questions. 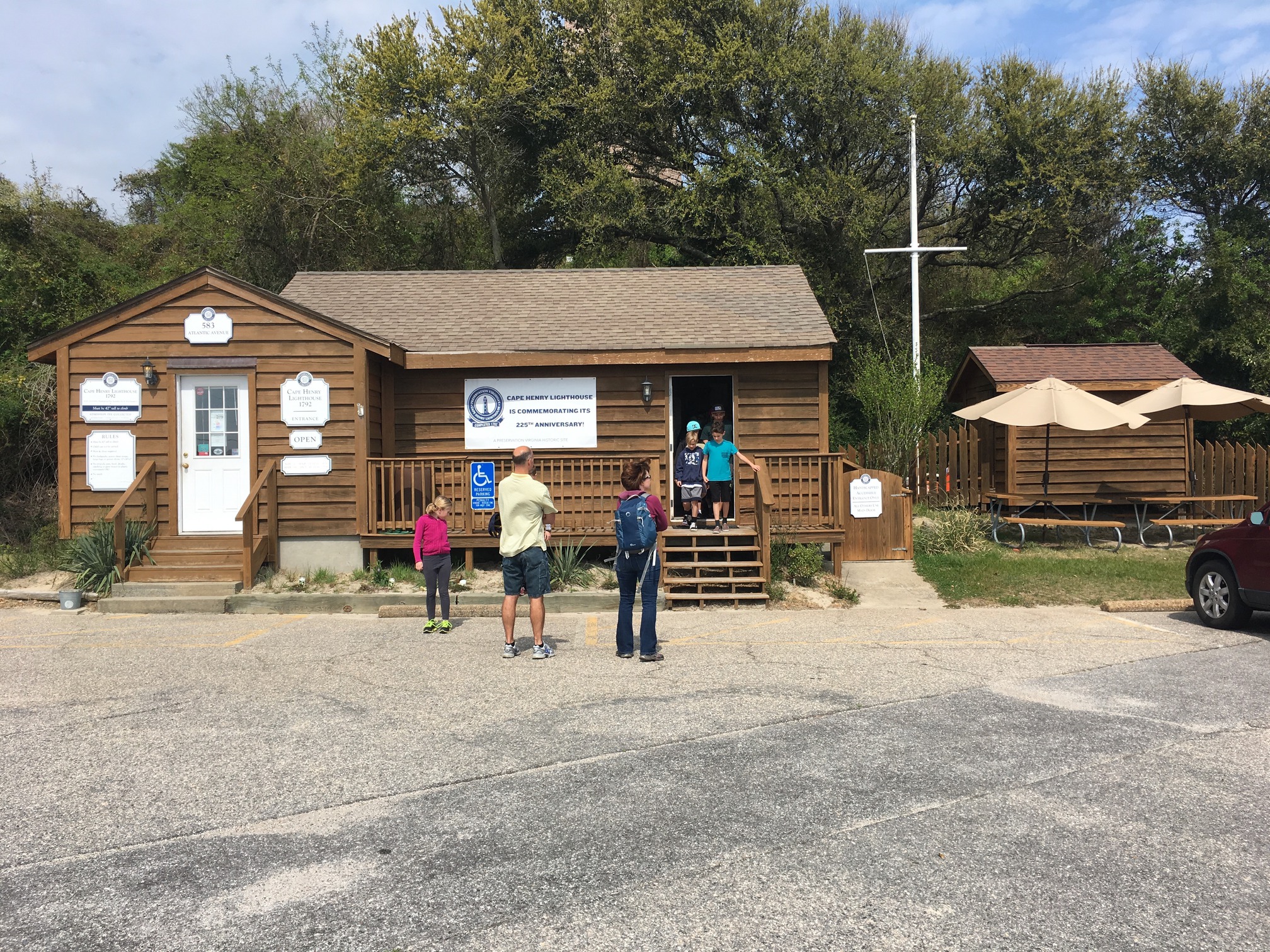 The lower grounds at the Cape Henry Lighthouse have plenty of parking, a giftshop, a place to eat a picnic lunch with primitive facilities, plus informative placards chock-full of history. Right behind this visitors’ center is the lighthouse, obscured by trees, and the massive stone staircase leading up to the lighthouse. At this point, it’s time to head inside the giftshop. 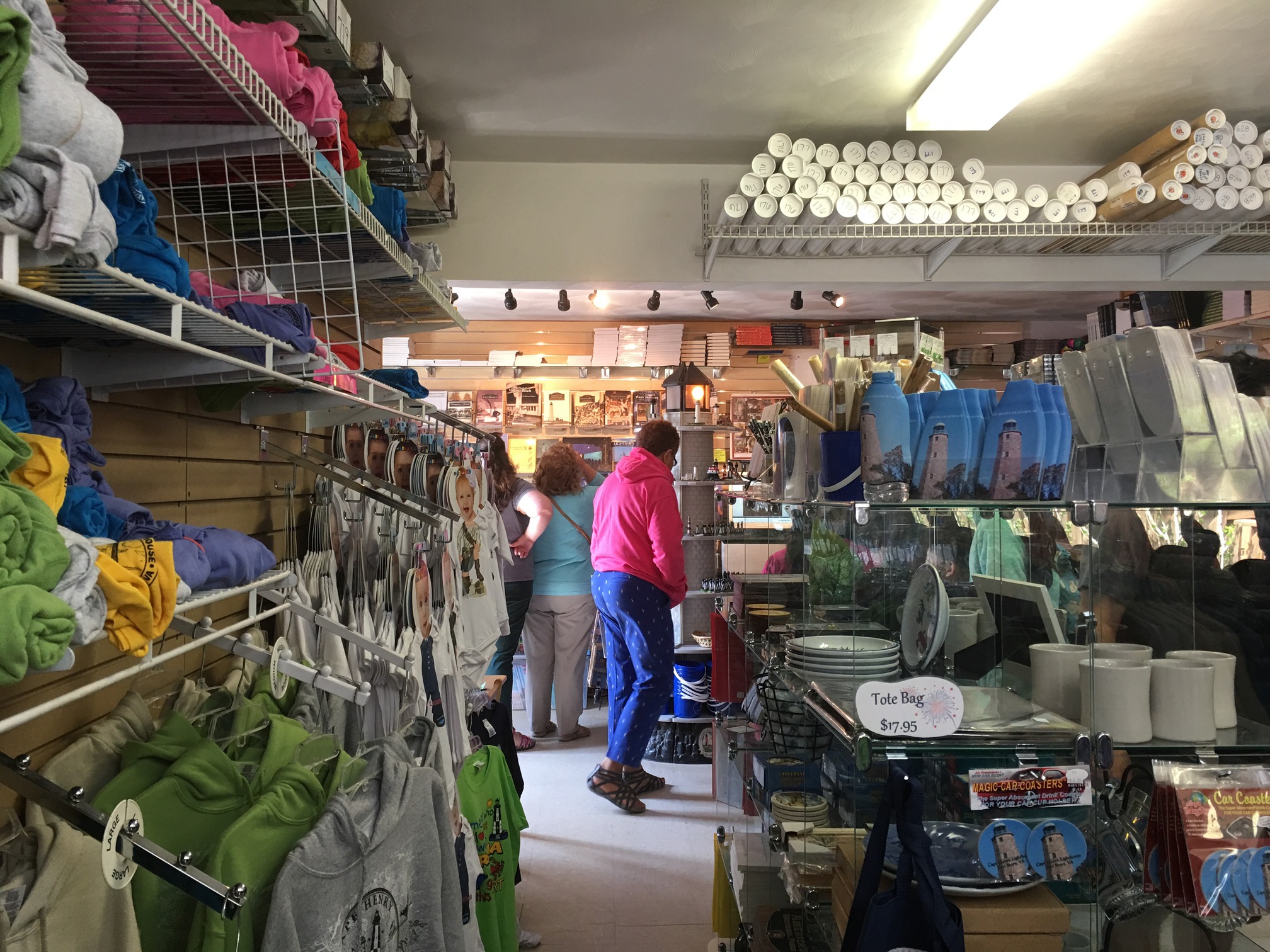 The giftshop is packed from floor to ceiling with every knick-knack, t-shirt, gewgaw, and novelty imaginable pertaining to Cape Henry. The staff here is also very friendly and knowledgable, and this is where visitors pay an entry fee to go up the stone steps to the lighthouse. The fee is $8 for people age 13 and over, with some discounts available. People must be at least 42 inches tall to make the climb, which has a few challenges. 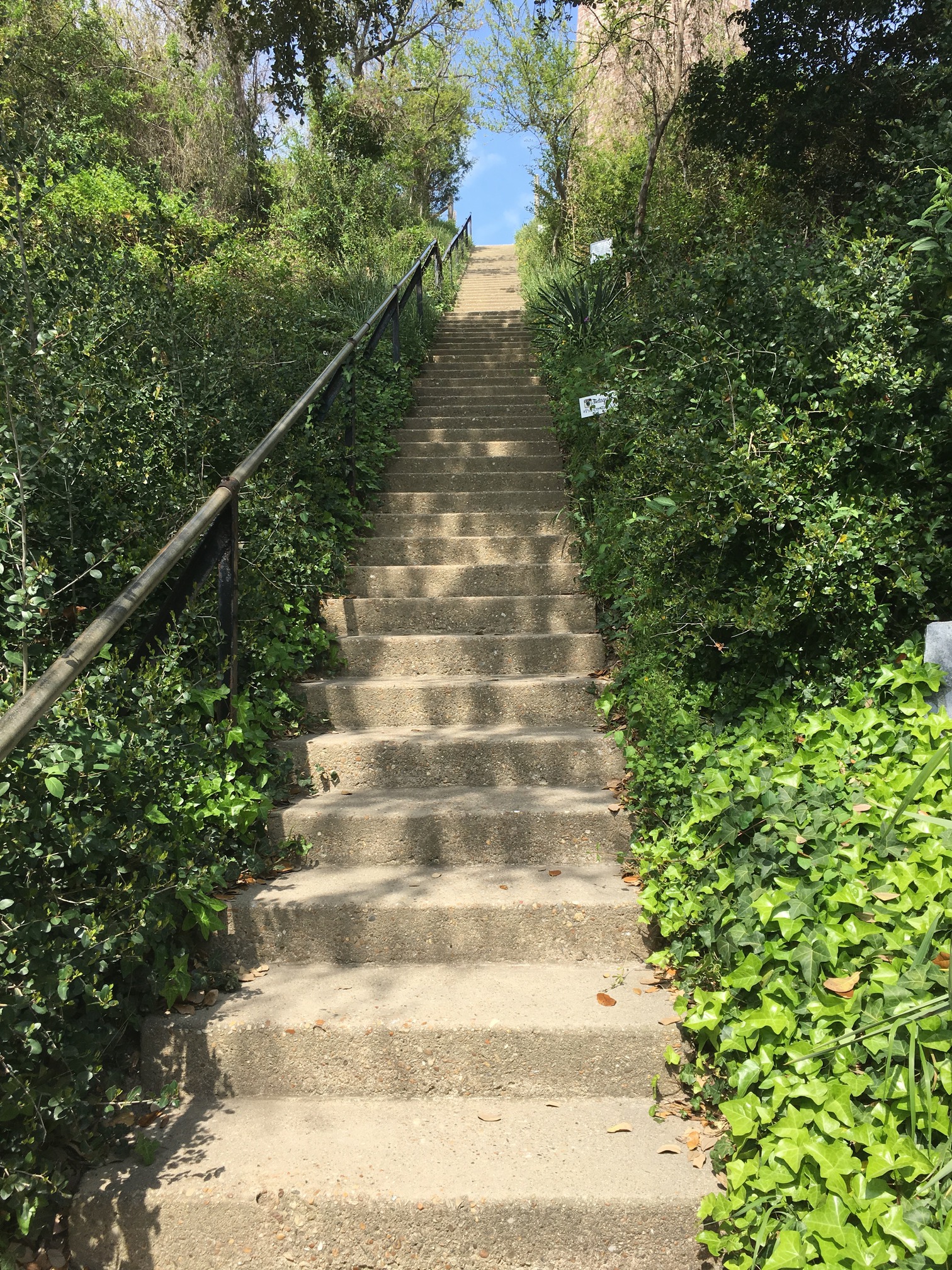 The path to the historic Cape Henry Lighthouse begins here. (The visitors’ web site strongly discourages flip-flops.) These nice stone steps are actually the easy part of the visit; the wrought-iron steps inside the lighthouse are a bit more challenging. No need to rush up the stairs here, as there are some pretty wildflowers here plus a handful of informational placards about the lighthouse in the early days. 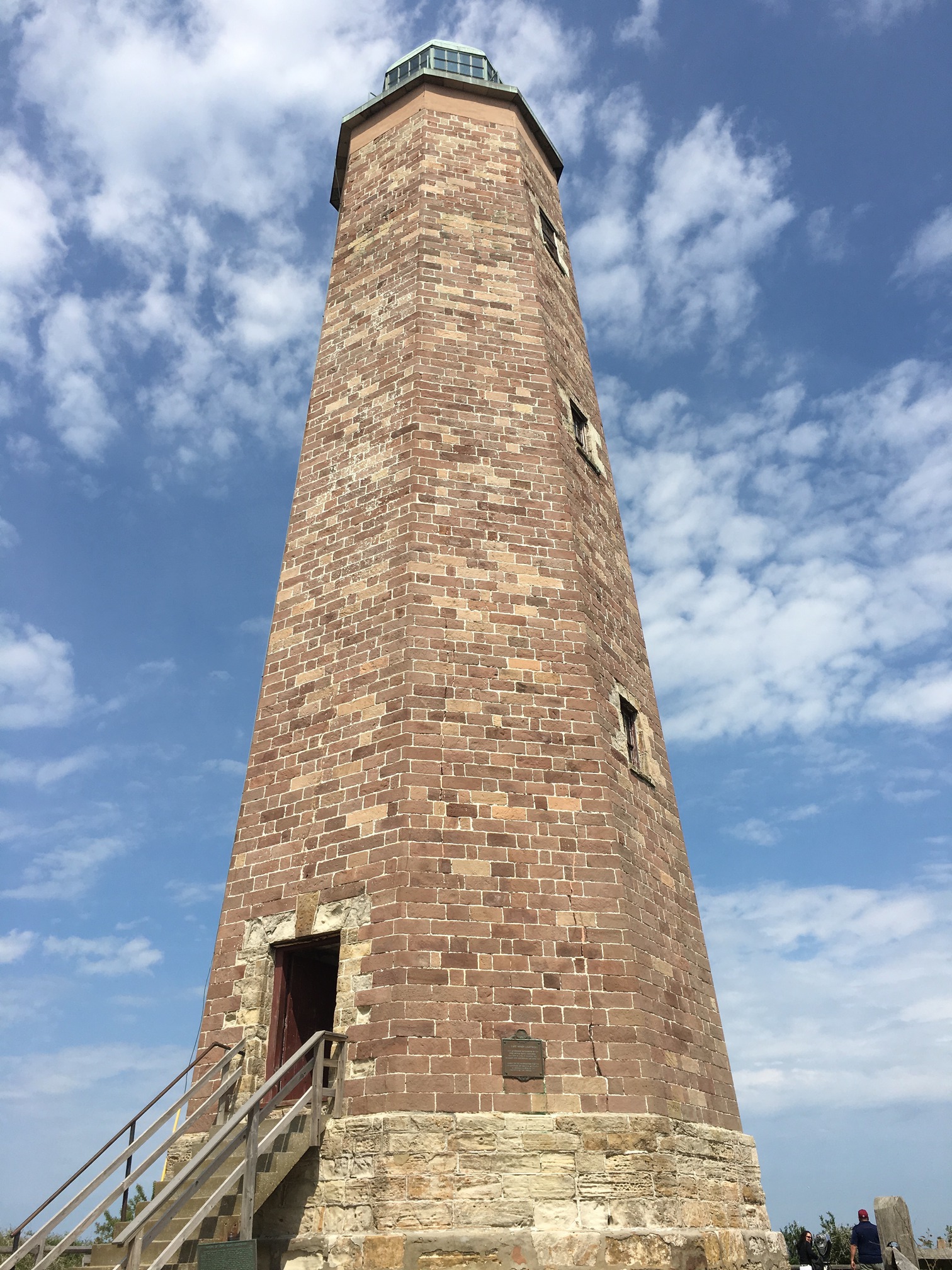 The Cape Henry Lighthouse has stood here at 90 feet tall since 1792, and this image was taken on April 13th, 2017, at 11:30 am, under clear skies. The idea for a lighthouse here actually began in 1720. The structure, though receiving several improvements even in recent years, was decommissioned in 1881. The Cape Henry Lighthouse was named as a National Historic Landmark in 1970 and is still used passively as a daytime navigational aid. It has been on the National Register of Historic Places since 1966. 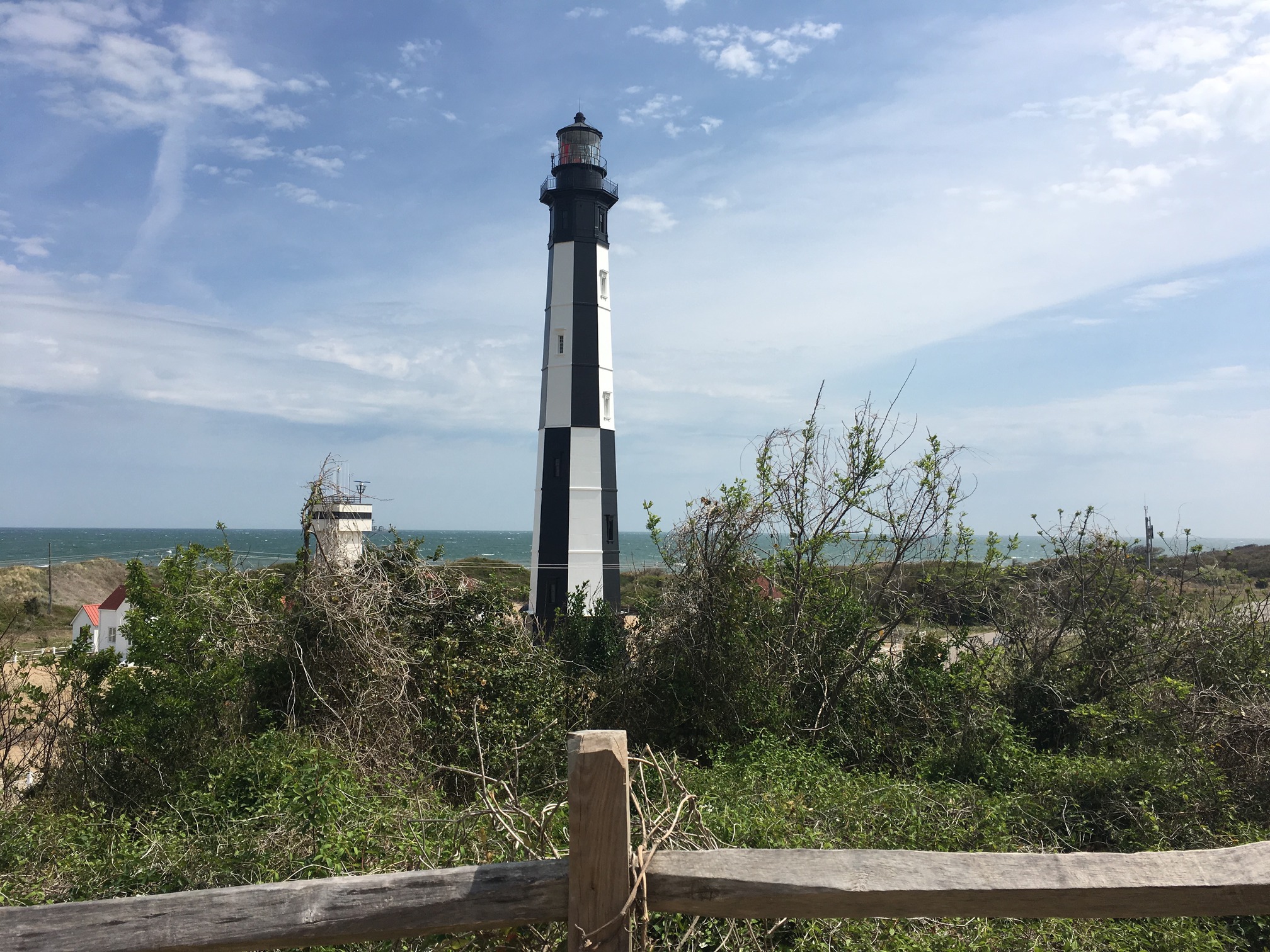 By 1870, Cape Henry Lighthouse was showing deep cracks in its sandstone structure and its lantern was considered deficient. It had even been damaged during the Civil War. So, plans were drawn up for a new cast-iron lighthouse with a concrete foundation. The New Cape Henry Lighthouse stands at 163 feet and was completed in 1881. It was fully automated in 1984 and is still in use today. Unfortunately, it is off-limits to visitors. 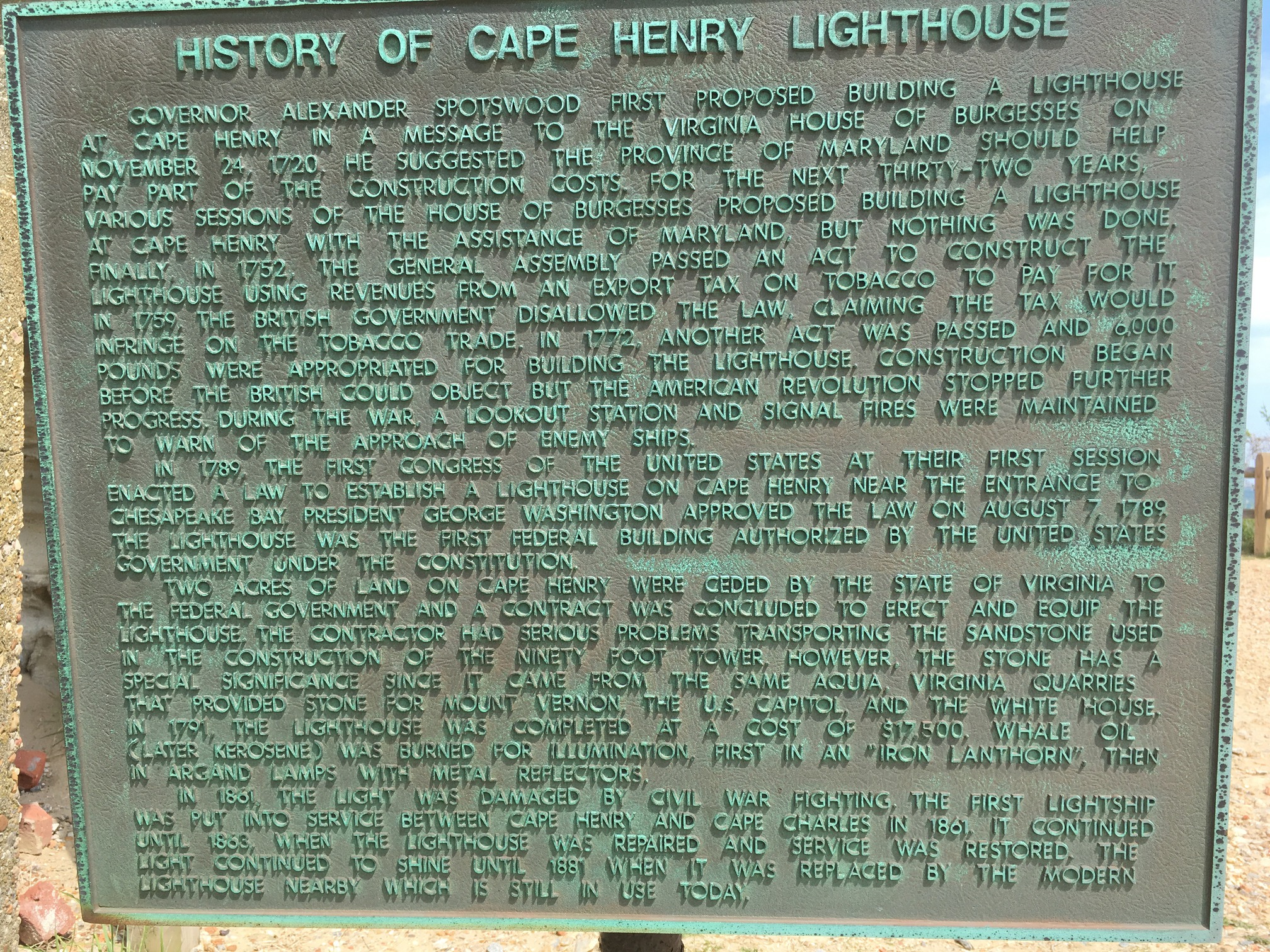 Despite the fact that this very spot overlooks so many of Virginia’s waterways, decades went by before any structure was built. The plaque here details the fits and starts of funding and construction for this project. This is the first federal building constructed in the United States, and the sandstone comes from the same Aquia quarry as the stones from Mount Vernon, the White House, and the U.S. Capitol. For visitors using GPS, the official address for the Cape Henry Lighthouse is 583 Atlantic Avenue, Ft. Story, VA 23459. 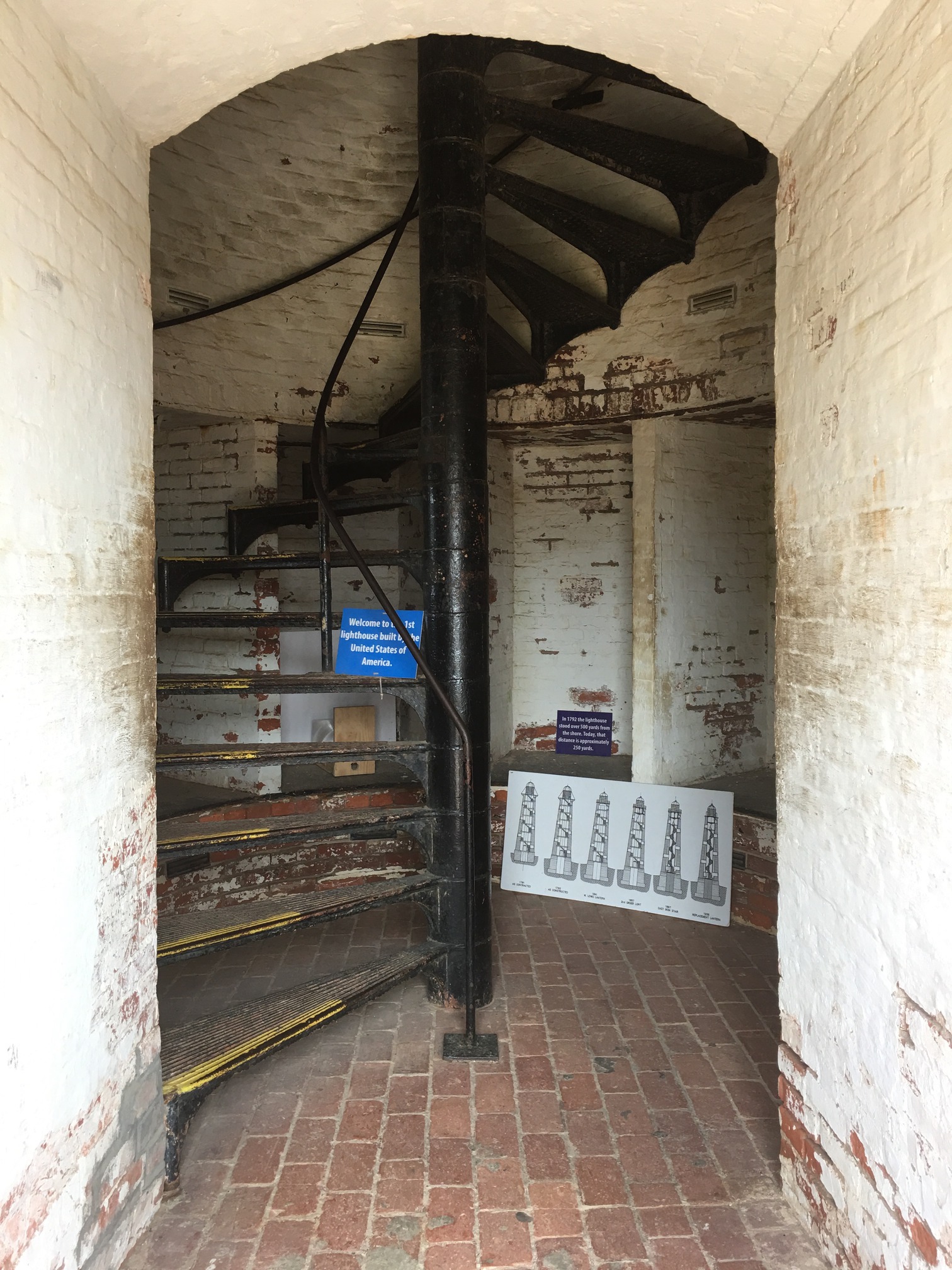 The entryway of the lighthouse shows many of the improvements made over the years. In 1841, a W. Lewis Lantern was added; in 1857 a 2nd order light was added; and also that year, bricks were added as a liner for the sandstone walls. In 1953, the structure was damaged by Hurricane Barbara and was repaired. But in 1867, the cast-iron stairs—shown here—were added. 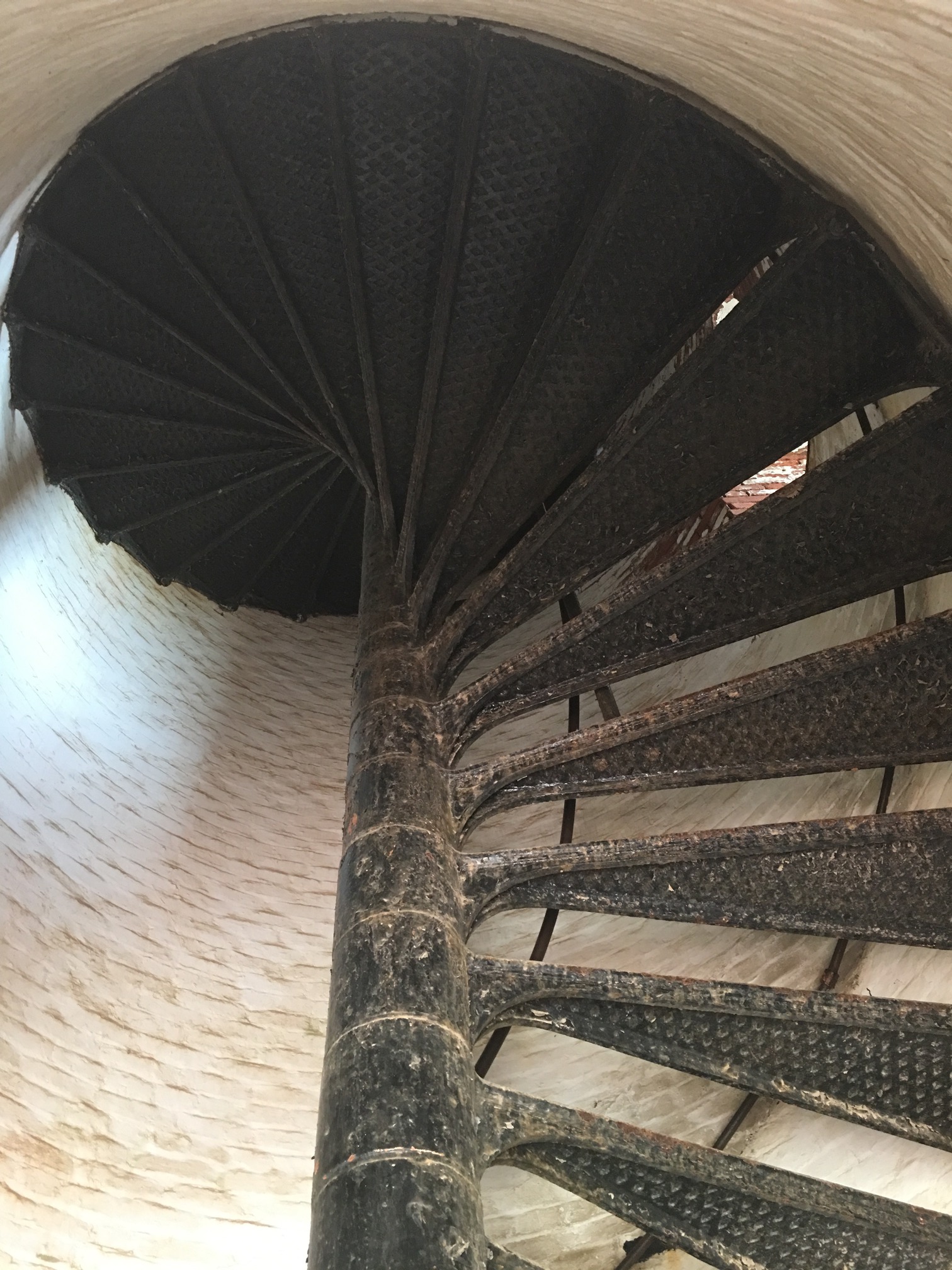 There are a lot of these cast-iron steps to climb to reach the top of the lighthouse. The online visitors guide has pretty strict rules for climbing these stairs: must be 42 inches tall, children may not be carried, no big backpacks or frontpacks, and sturdy shoes are strongly encouraged. There are handrails, but they are difficult to reach. Just to think, all of these steps used to be wooden staircases. The view from the top, however, is completely worth it. 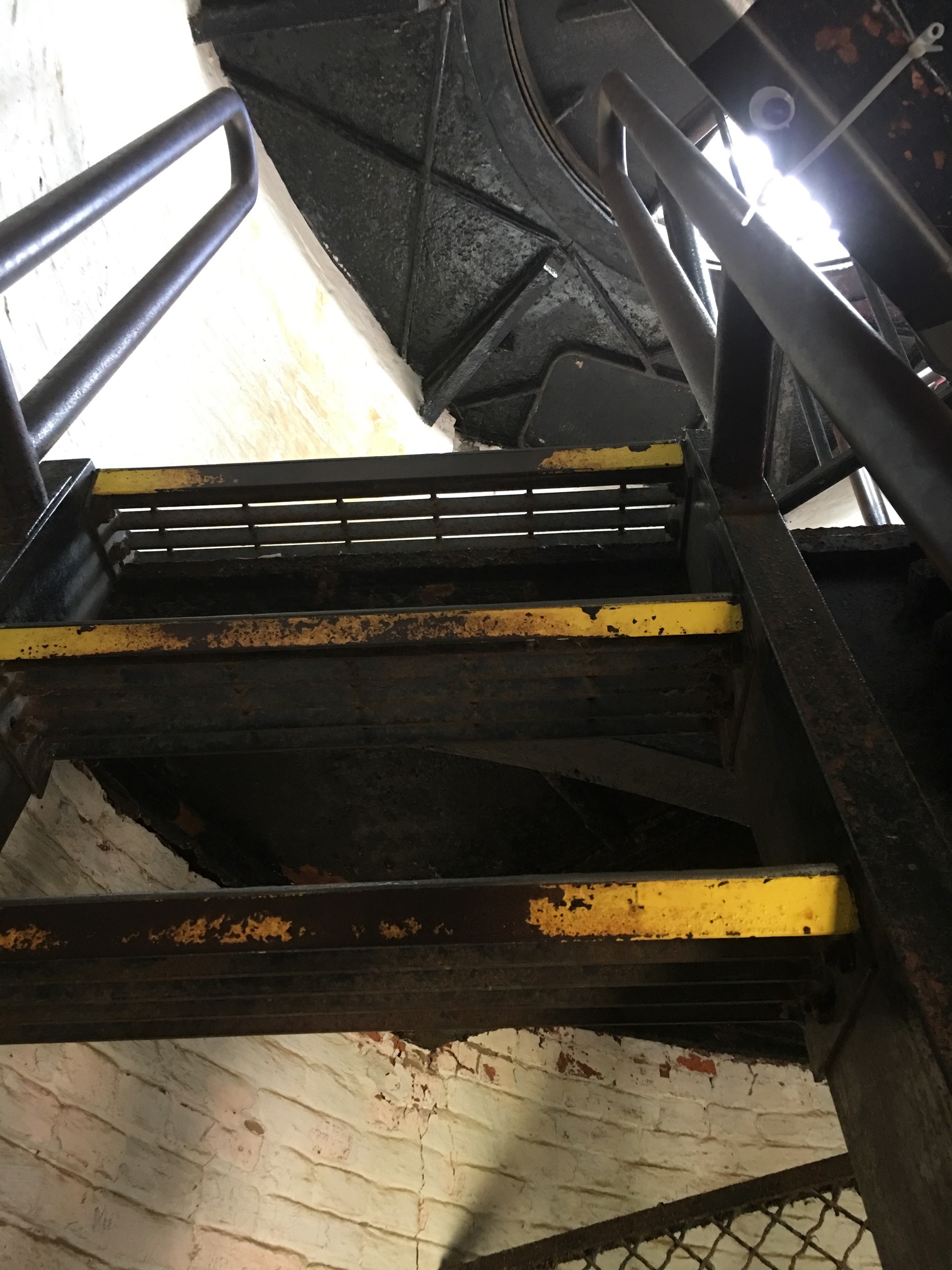 There is a steep ladder to climb to reach the platform that leads to the glass “birdhouse” atop the Cape Henry Lighthouse. One person at a time, passage must be negotiated individually between people going up and people going down. If carrying a purse, it must be secured. The platform that this ladder sits upon is quite small. 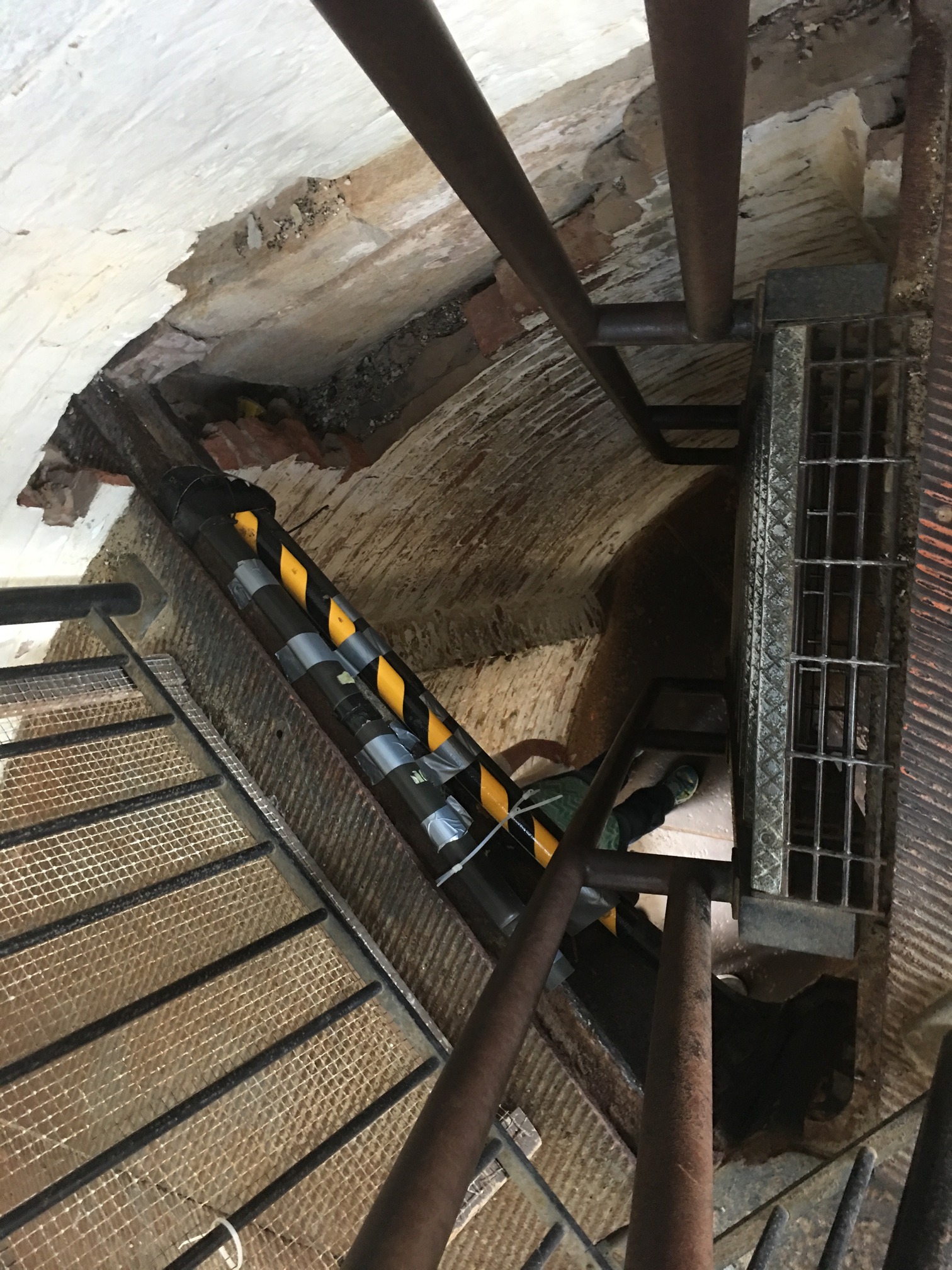 Coming up the ladder wasn’t easy and going down was tricky. Again, negotiations were made between the top and bottom of the ladder; a person going down has priority. But in the meantime, the view from the top of the Cape Henry Lighthouse was amazing. 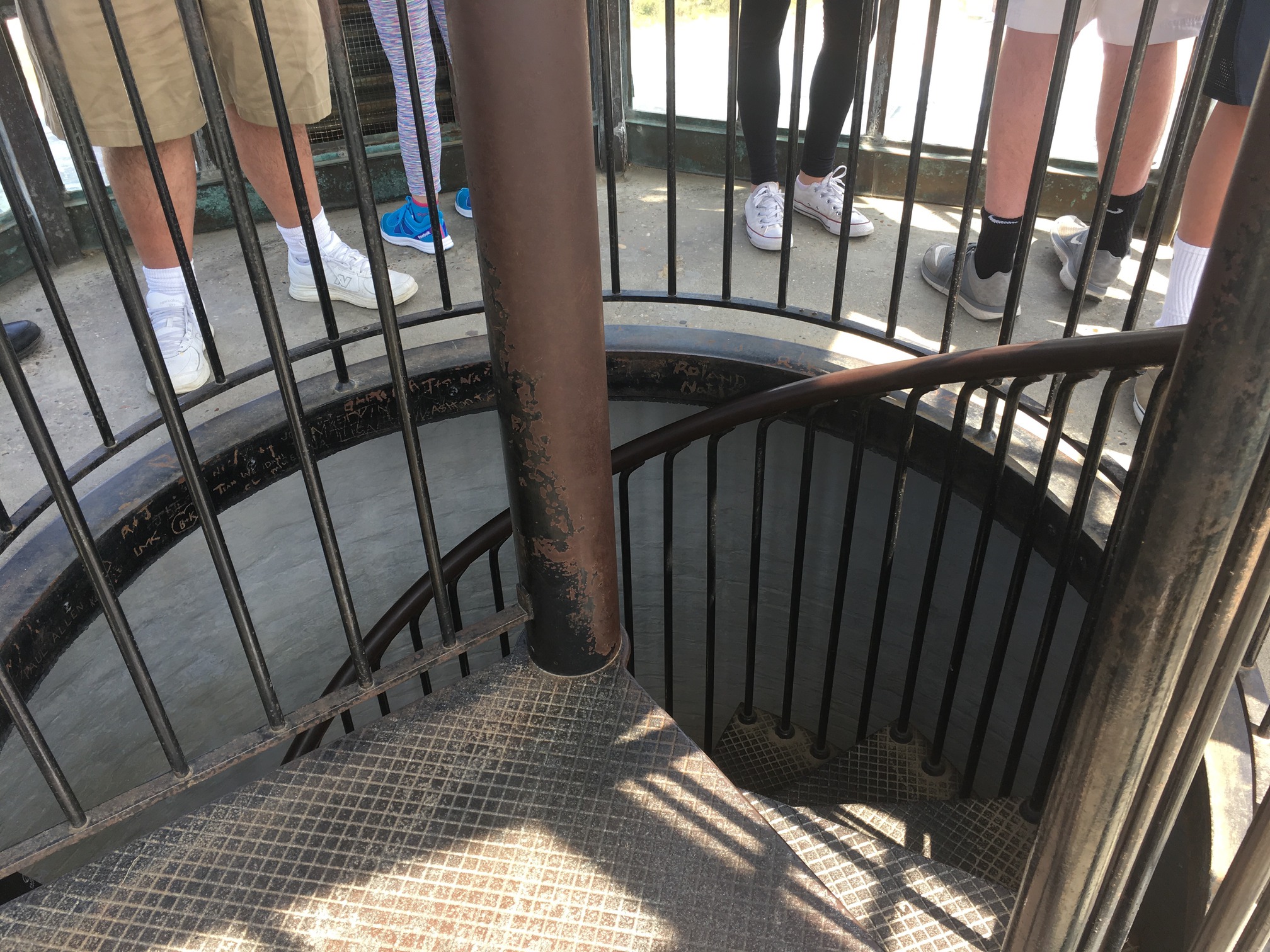 Now that the steep steps have been cleared, there’s only one more spiral staircase until reaching the observation area. It’s also a tiny platform, and the temperatures seem to be increasing farther up in the lighthouse. On the way up, there are windows to look out from, but nothing compares to the view from the top of the Chesapeake Bay and the Atlantic Ocean from here in the birdhouse. 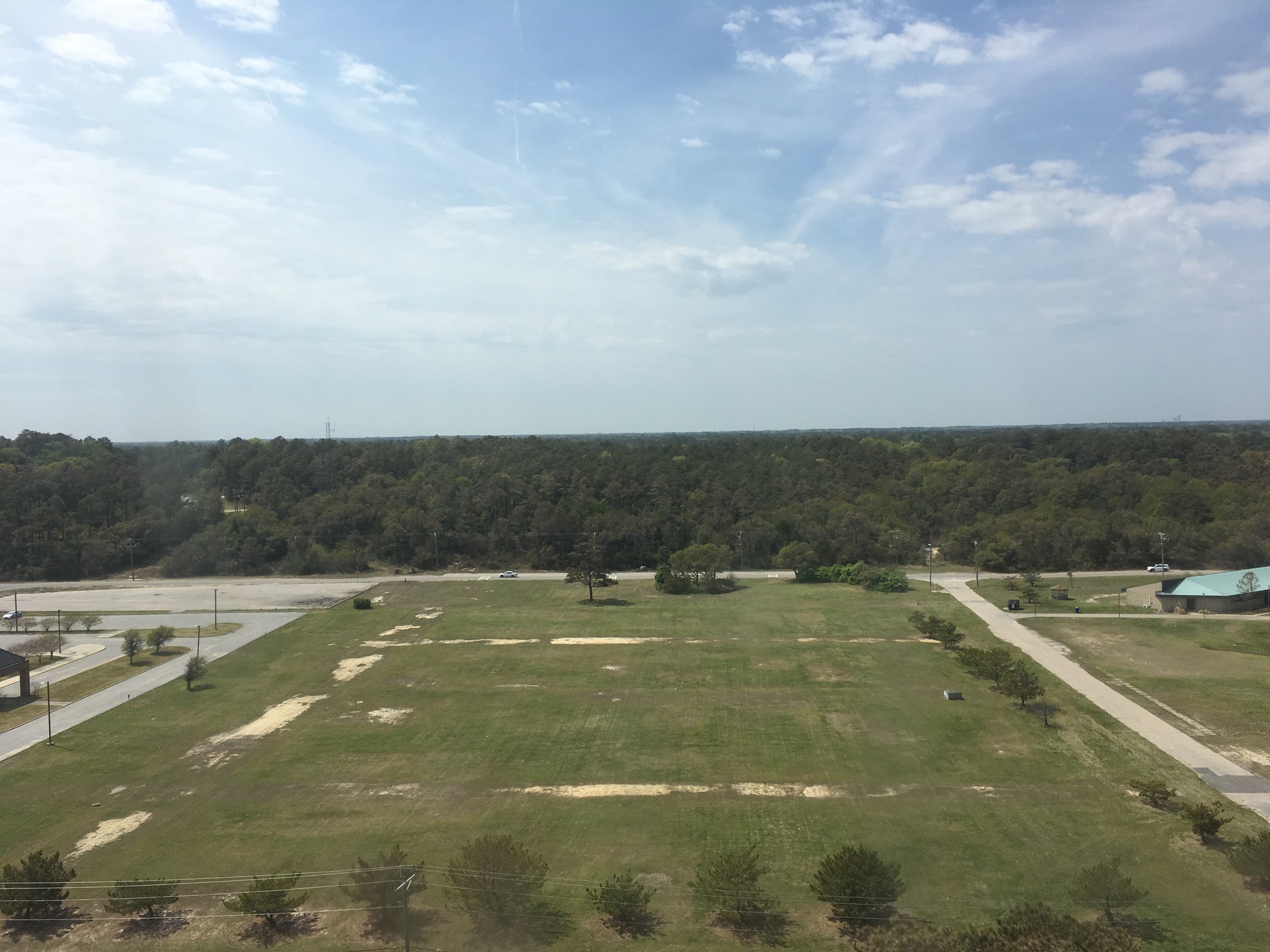 The temperature at this point at Cape Henry, Virginia, was 59 degrees, with a low of 52 and a high of 65. Staff in the gift shop report that temperatures in the glass-paneled birdhouse, where the lantern used to be, can get as high as 145 degrees F in the summer. Staff will close the birdhouse on such days, in addition to days with high winds and lightning. It was quite pleasant up top on this date, where a good guess put the temp at 75 degrees. This view looks south by southwest through a large glass pane. 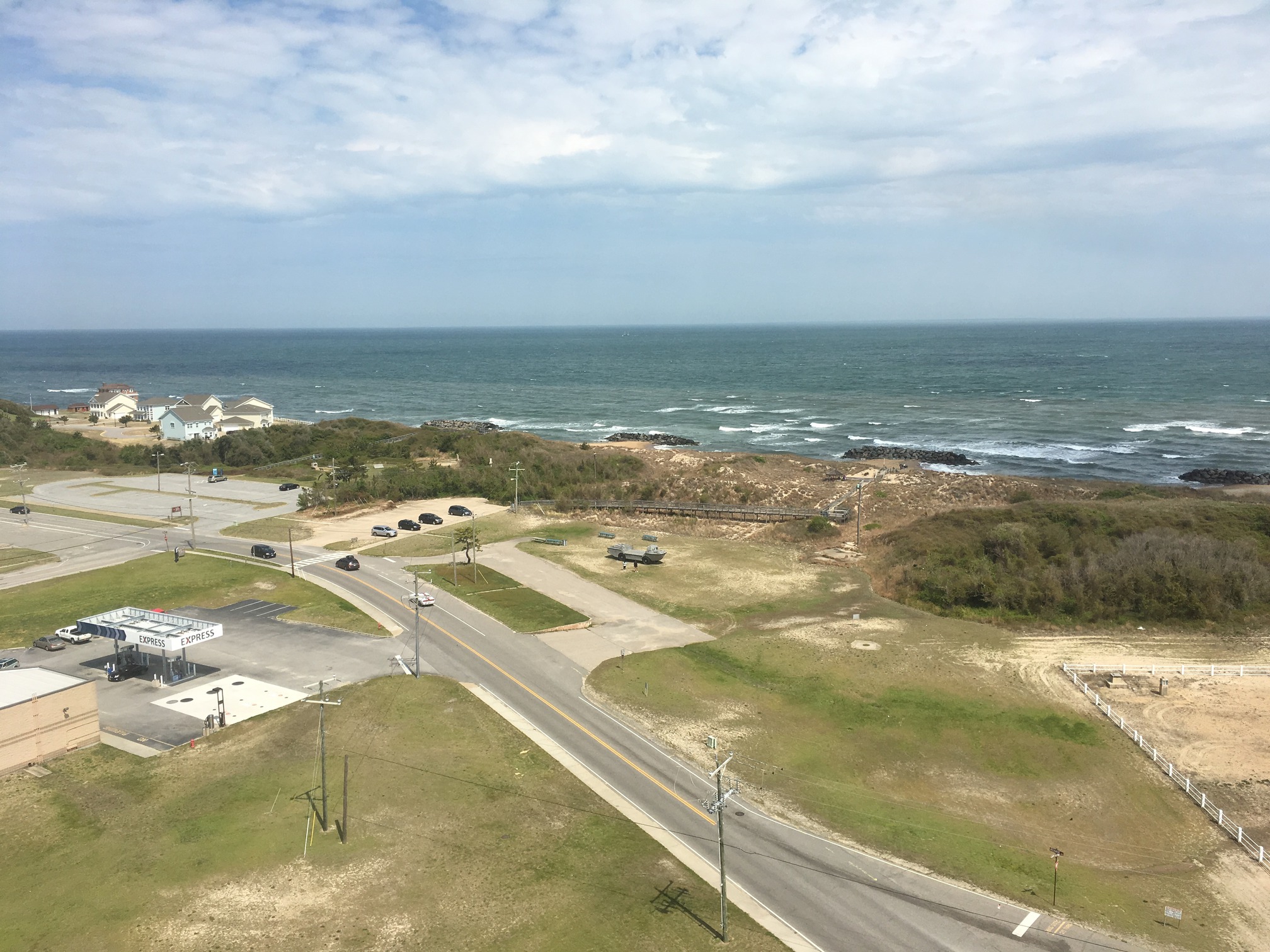 This view from the birdhouse looks north by northeast. This is about the limit of where visitors can go on the base; an entity called Preservation Virginia owns the lighthouse and the 1.77 acres it sits on. The guards at the entry gate will explain where visitors can and can’t go, and are happy to answer questions. 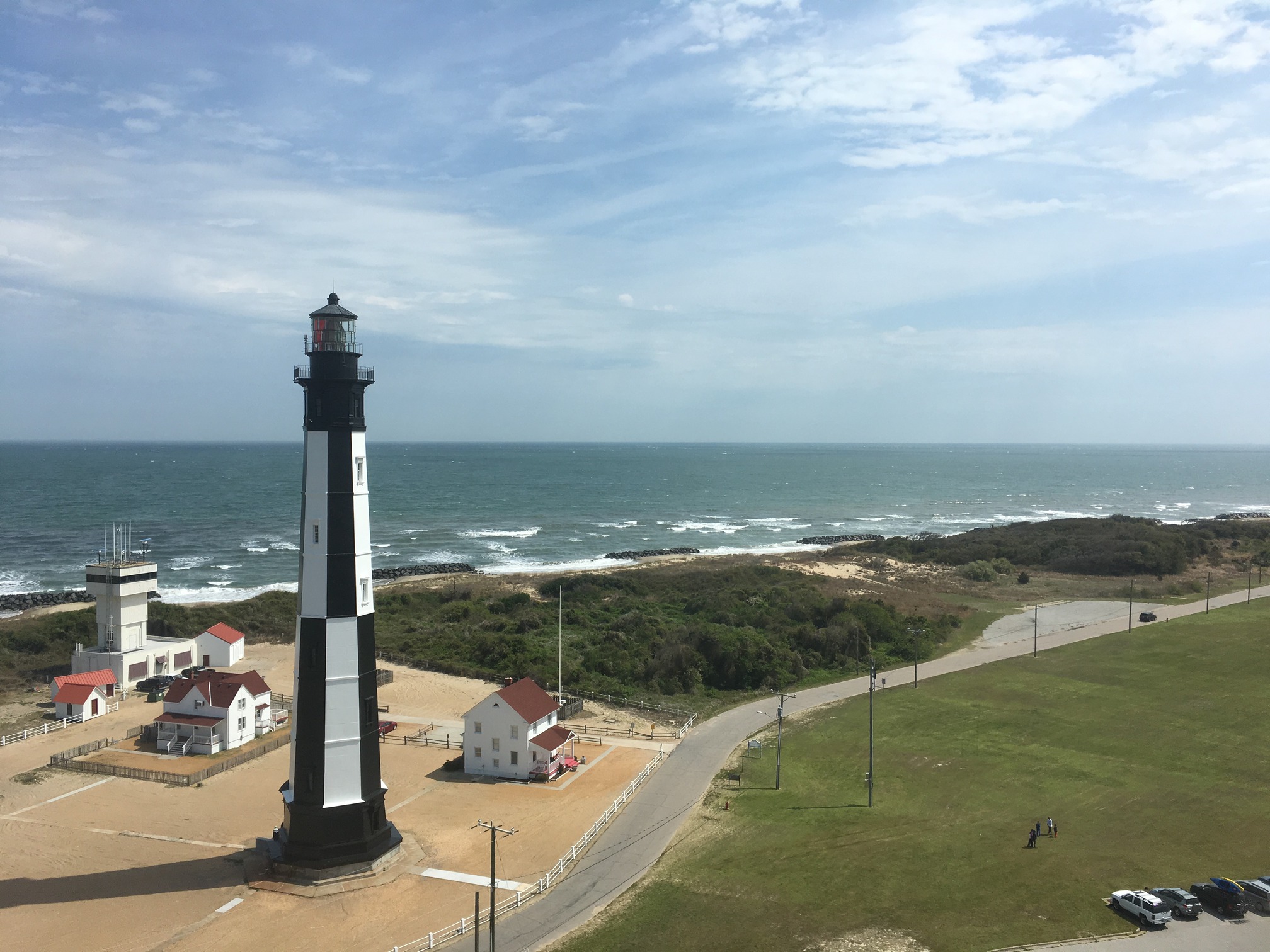 This view of the New Cape Henry Lighthouse looks northeast. The U.S. Coast Guard maintains this structure, and a Coast Guard district commander once said that because of its 163-foot height, it was “one of the major landfall aids for the Chesapeake Bay entrance.” This thoroughly modern lighthouse has GPS installed; in decades past it has also been the site of radio signal research. 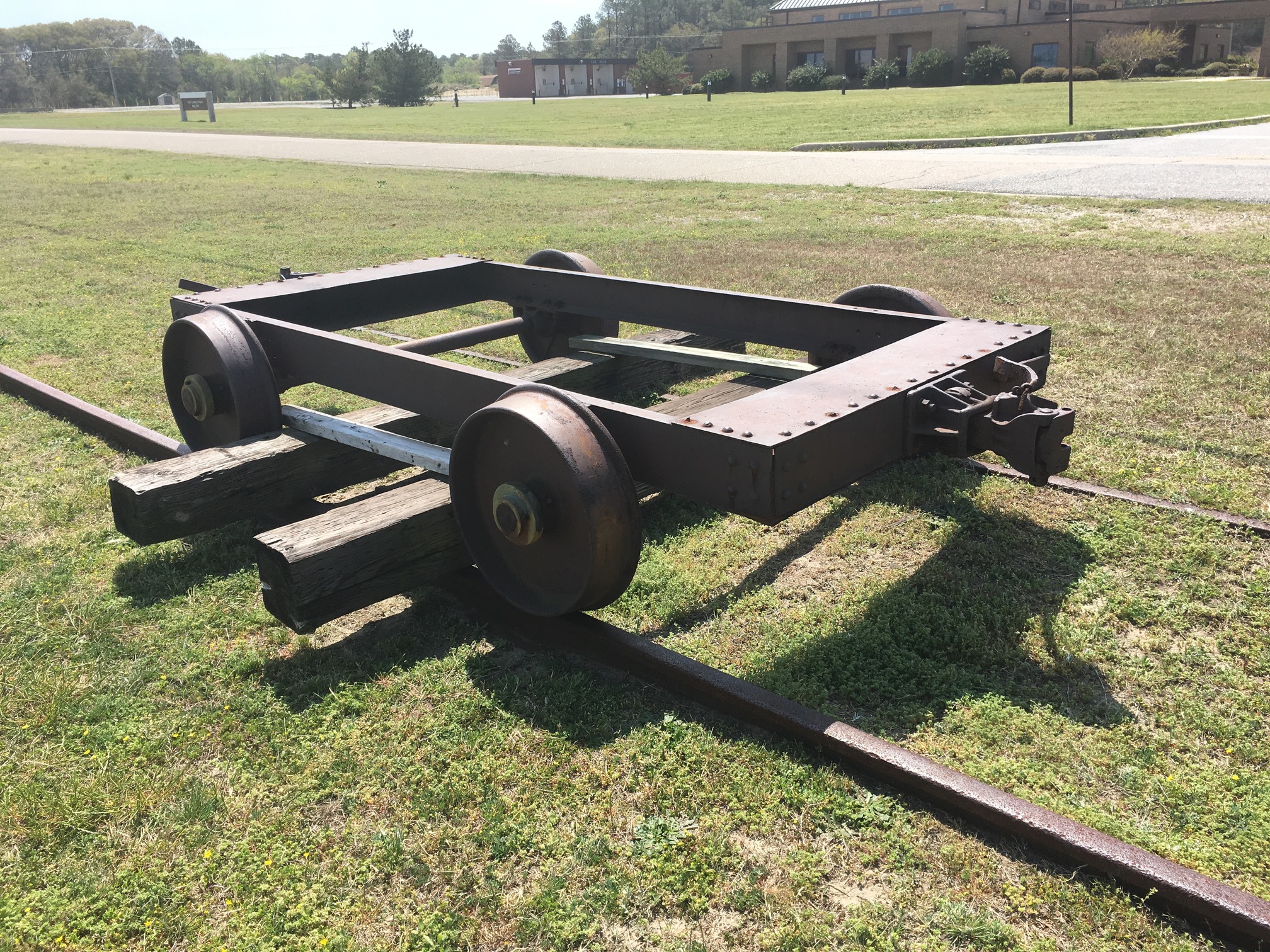 Back on the ground after the climb down, there are many other things to look at near the giftshop. There are mini-billboards with old photos to read; one explains how the Army first arrived at Cape Henry in 1916 during World War I. The Fort Story installation sits on 1451 acres used by the Army’s 7th Sustainment Brigade, Naval Amphibious Forces, and Special Operations forces. There was also a railroad that went through here from 1903 through 1950. 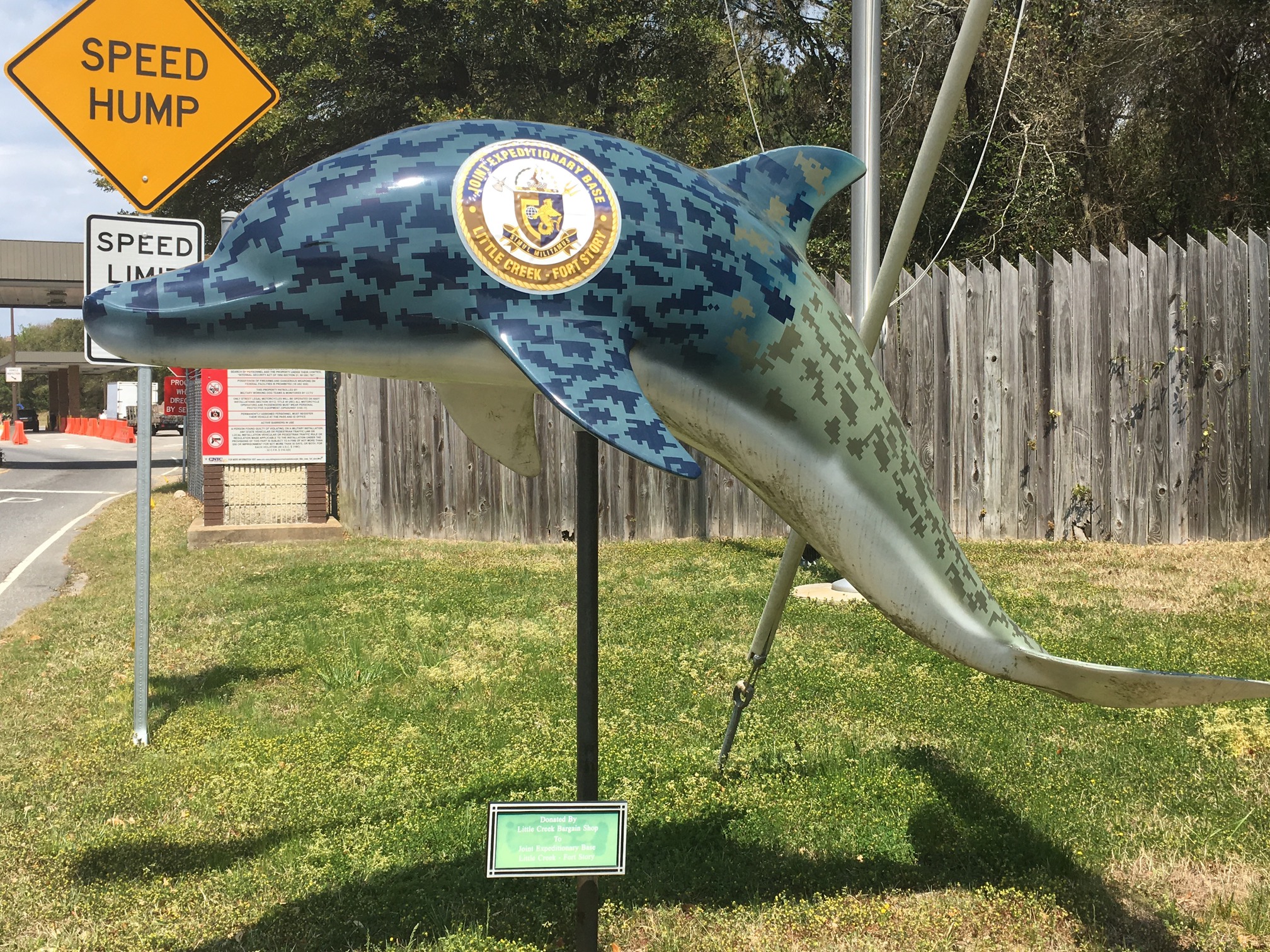 Looking for a porpoise in life? This guy has found his at Fort Story Gate 8 on Atlantic Avenue; he was originally donated by the Little Creek Bargain Shop Thrift Store nearby. This is the best way to go in to get to the Cape Henry Lighthouse and the best place to get one last look at the lighthouse grounds before heading back to Virginia Beach.