The city of Myrtle Beach has its own fabulous shoreline, with forty public access points along Ocean Boulevard. Look for the small blue signs between the hotels and the condos. The sandy center of South Carolina's Grand Strand is just a few steps away. 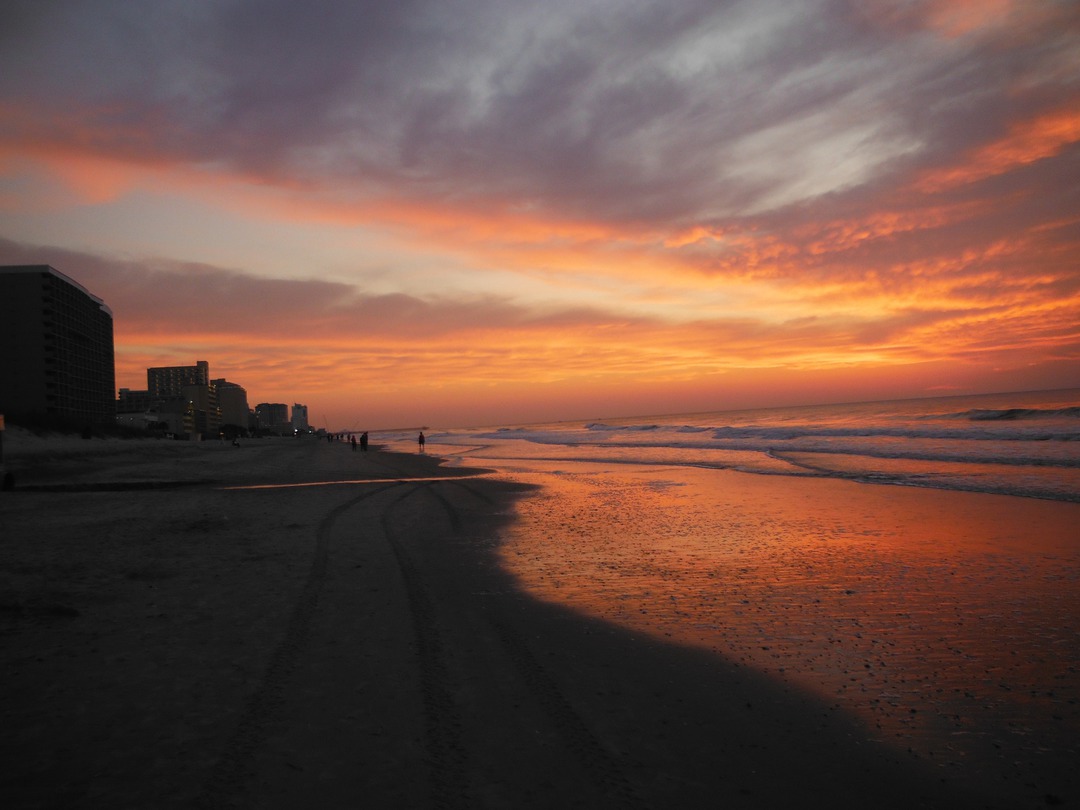 Because Myrtle Beach faces east, the day starts early. The first stirrings of morning actually began at 5:39 am with astronomical twilight. Astronomical twilight is when the sun is 18 degrees below the horizon and there is no color in the sky. 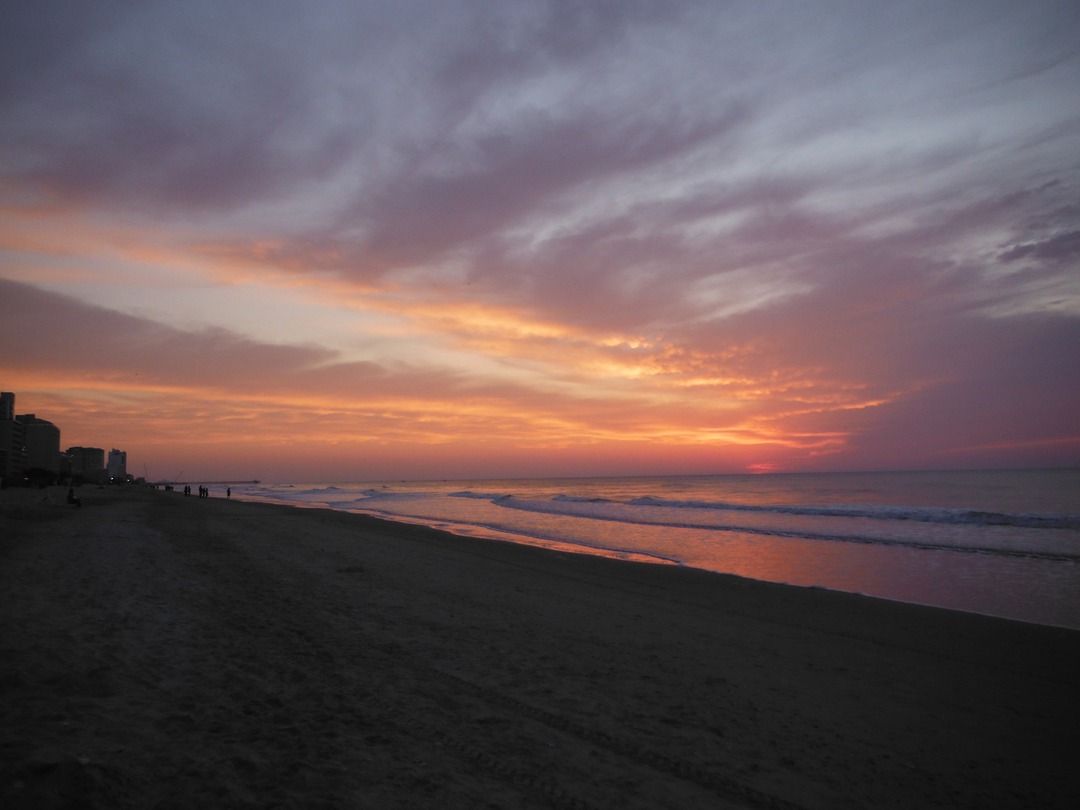 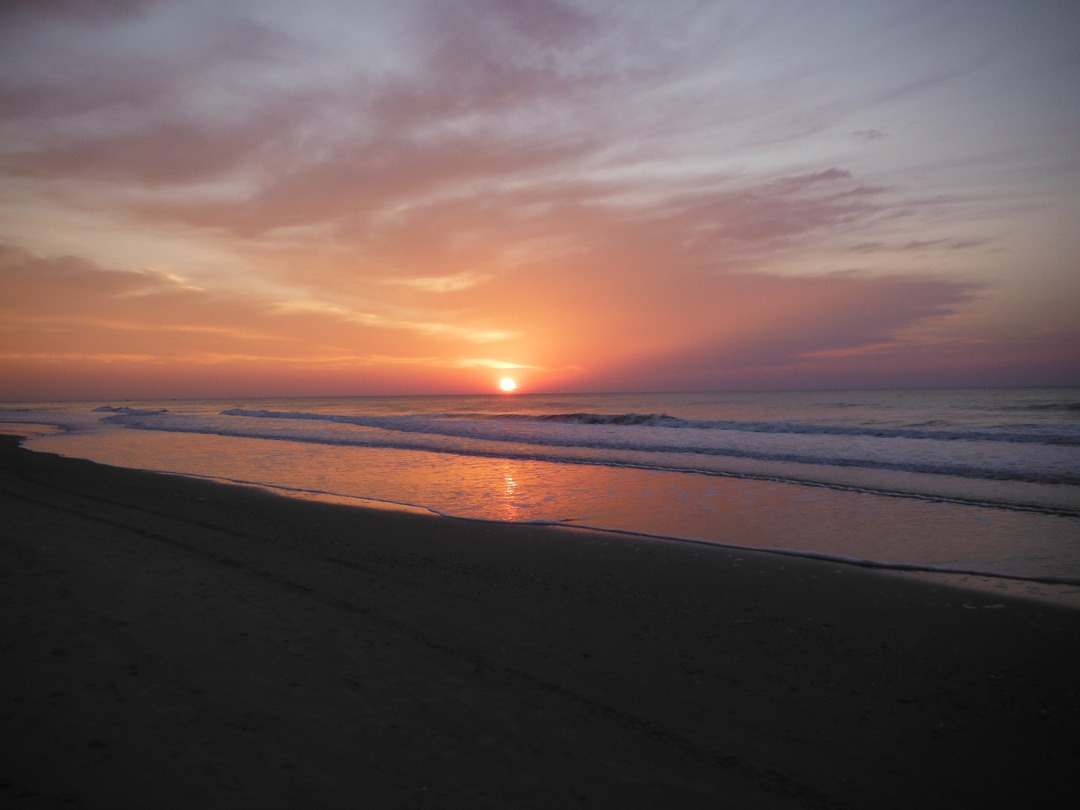 It's 7:15 and the sun is up. There are a lot of people out on the beach to watch the sunrise, and the lights on the beachfront hotels will be on for just a little while longer. 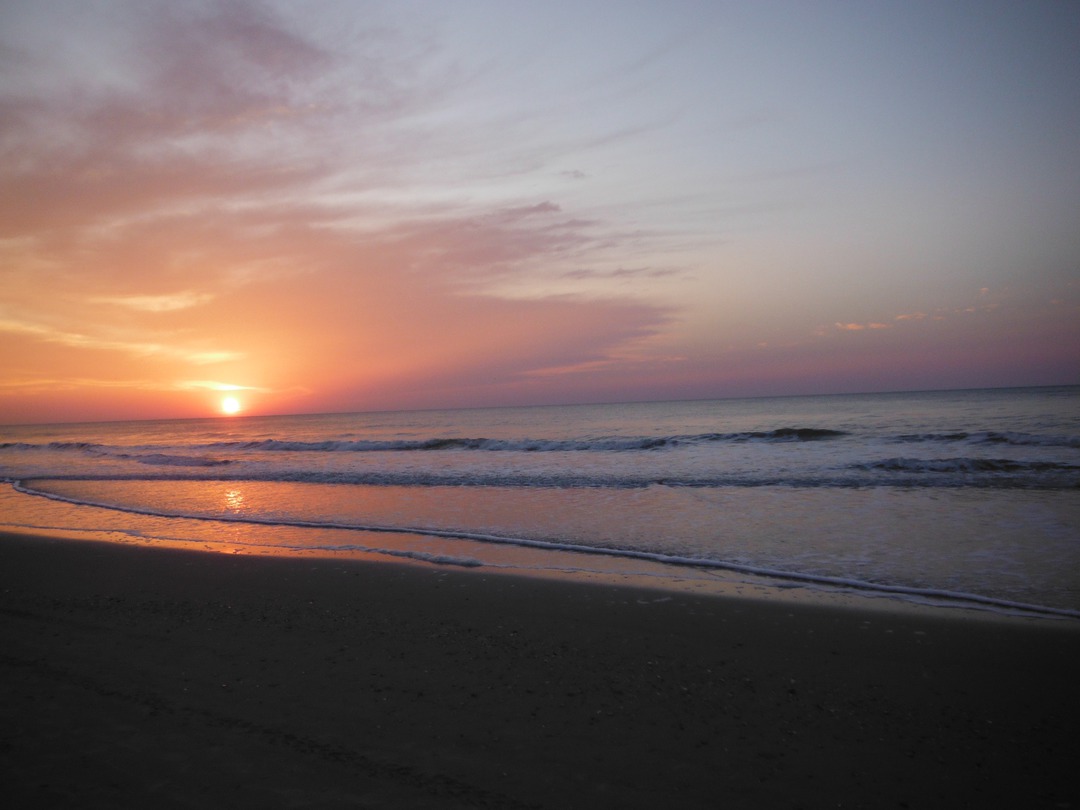 More and more people are coming onto the beach, at 7:16 am. What a difference a minute makes. 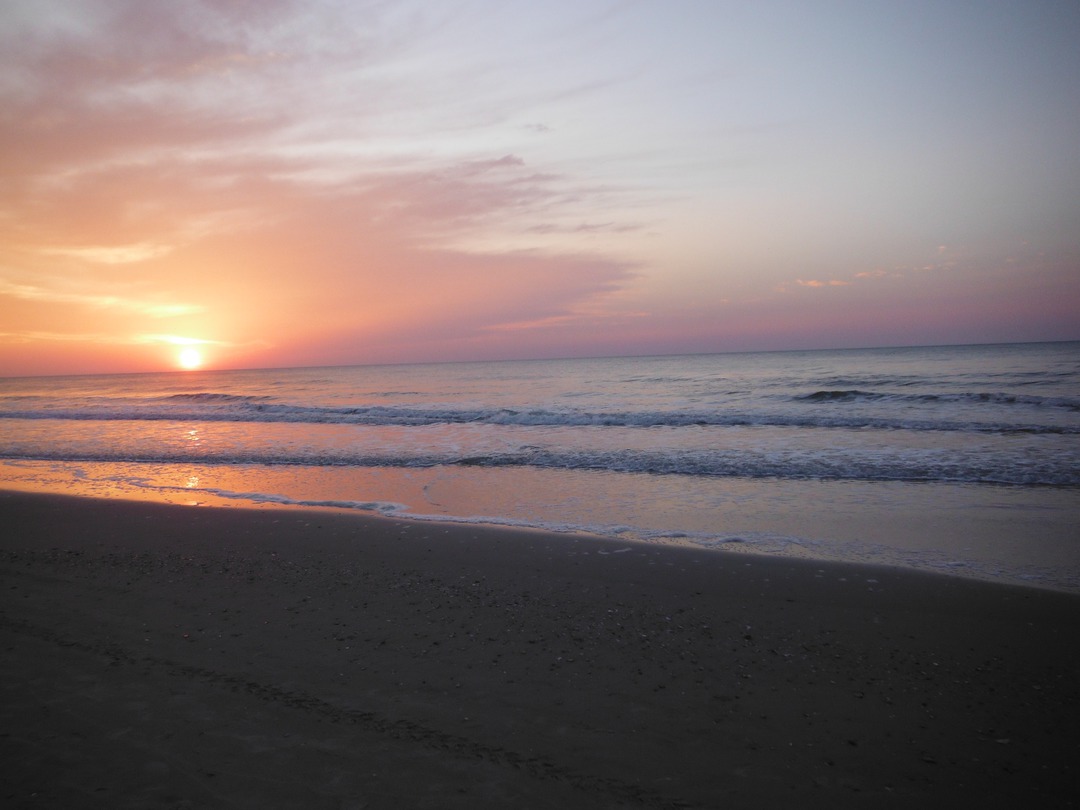 At 7:17 am, last night is just a memory. The familiar aromas of bacon, pancakes, and coffee are drifting in from the beachfront hotels. The shells are almost visible in the sand here, and people are starting to claim their spots on the beach for the day . . . or at least till lunchtime. 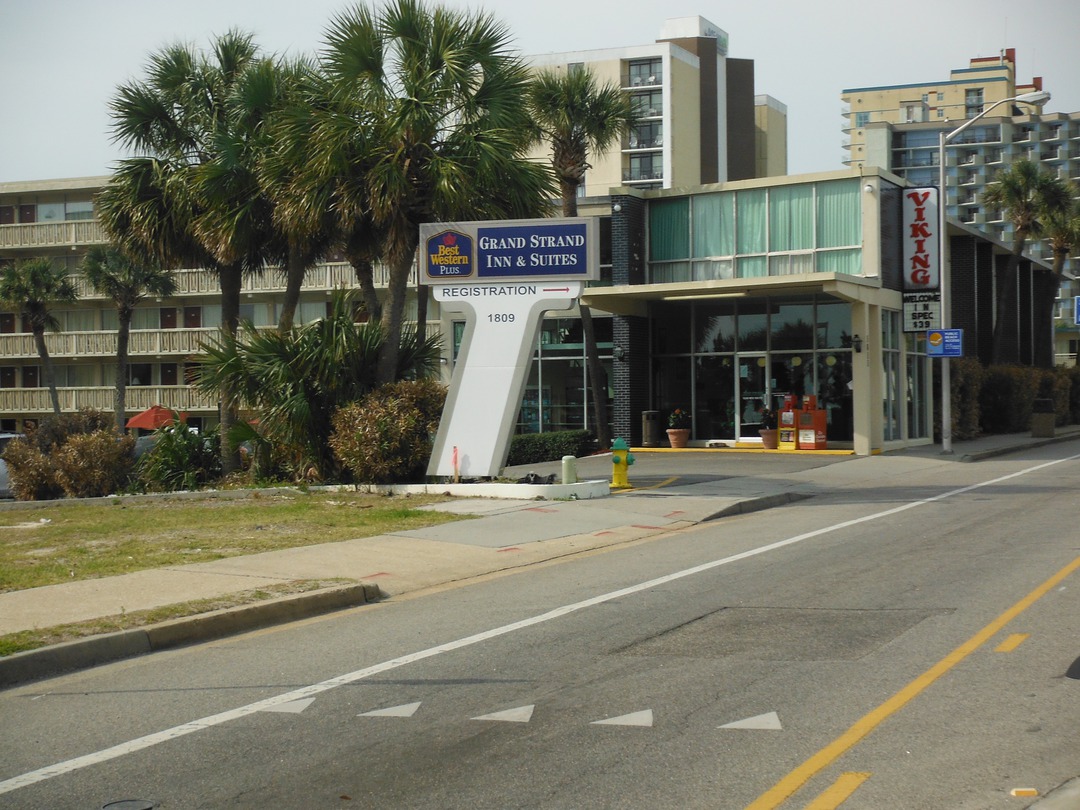 It's about 10:30 am along South Ocean Boulevard in the city of Myrtle Beach. The sun is up, breakfast hours are over, and the beach awaits. Here is the 19th Street public access point, as designated by the small blue sign affixed to the overhanging streetlamp post on the right. 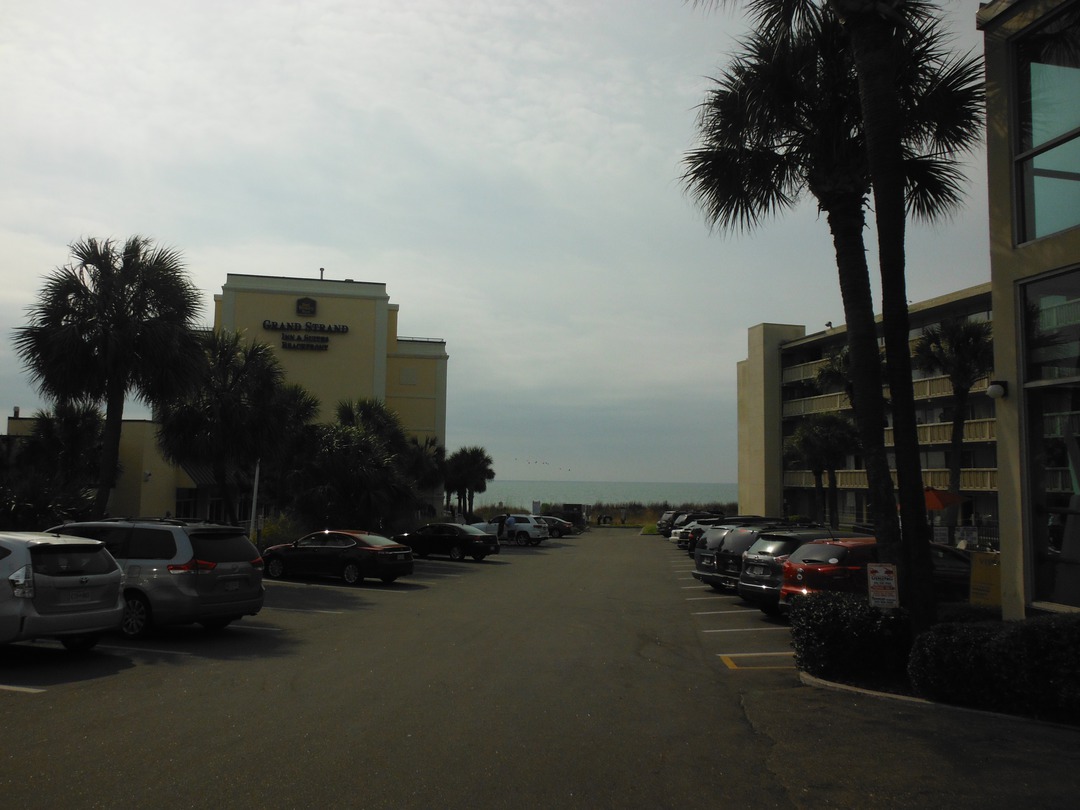 The 19th Street public access point doesn't have much in the way of amenities but there are a few metered public parking spots on the lefthand side. The board walk is just beyond the dune grasses. 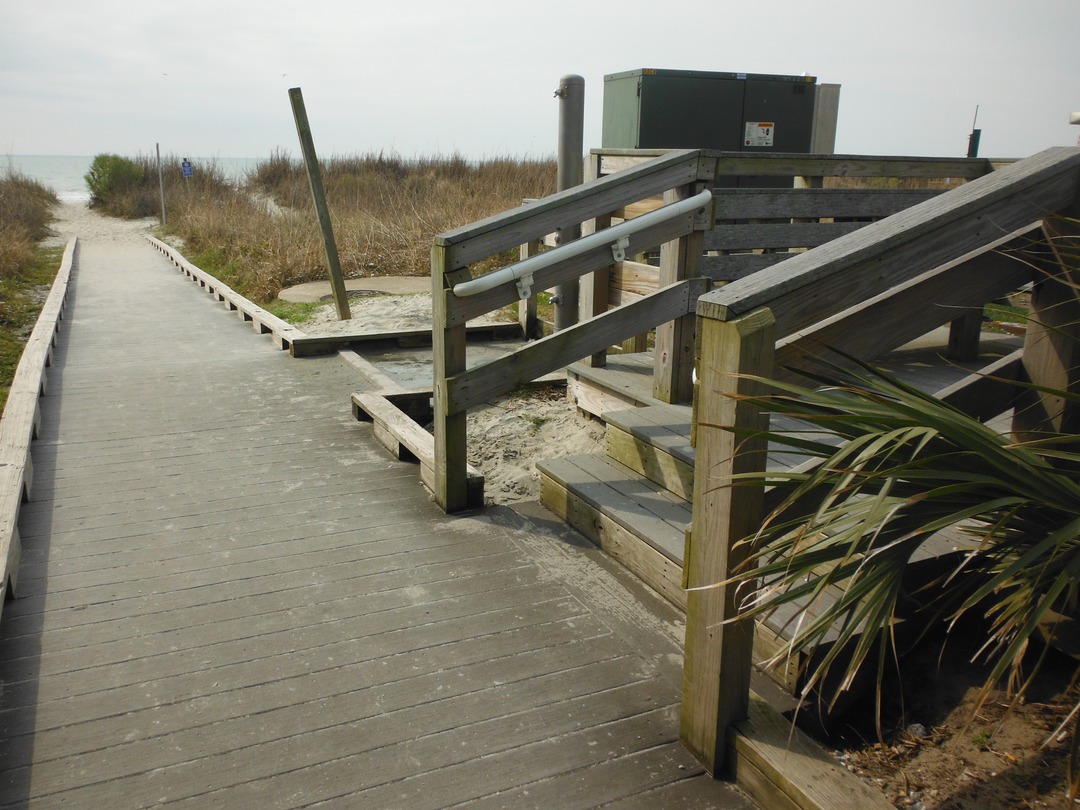 The boardwalk here includes a convenient footbath with a place to sit away from the sand. There is unfortunately no public restroom here.

Here is the main reason to come to the Myrtle Beach city beach: the dune path straight ahead leads directly to the Atlantic Ocean. The path on the left heads north, and the path on the right heads south. Several beachfront hotels lie along these two paths. 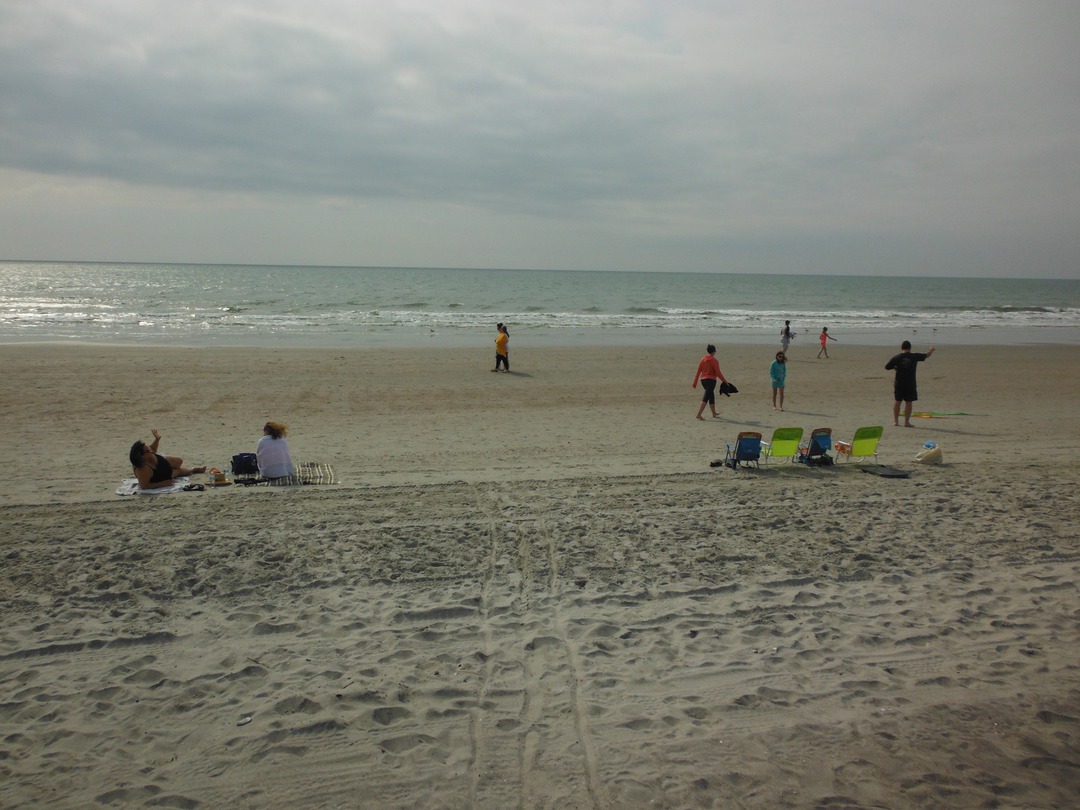 It's about 62 degrees here on the beach, and though it is now warmer than it was at sunrise, beach-goers are still bundled up. The wind is a little blustery at 10-15 mph, and the water is cold. 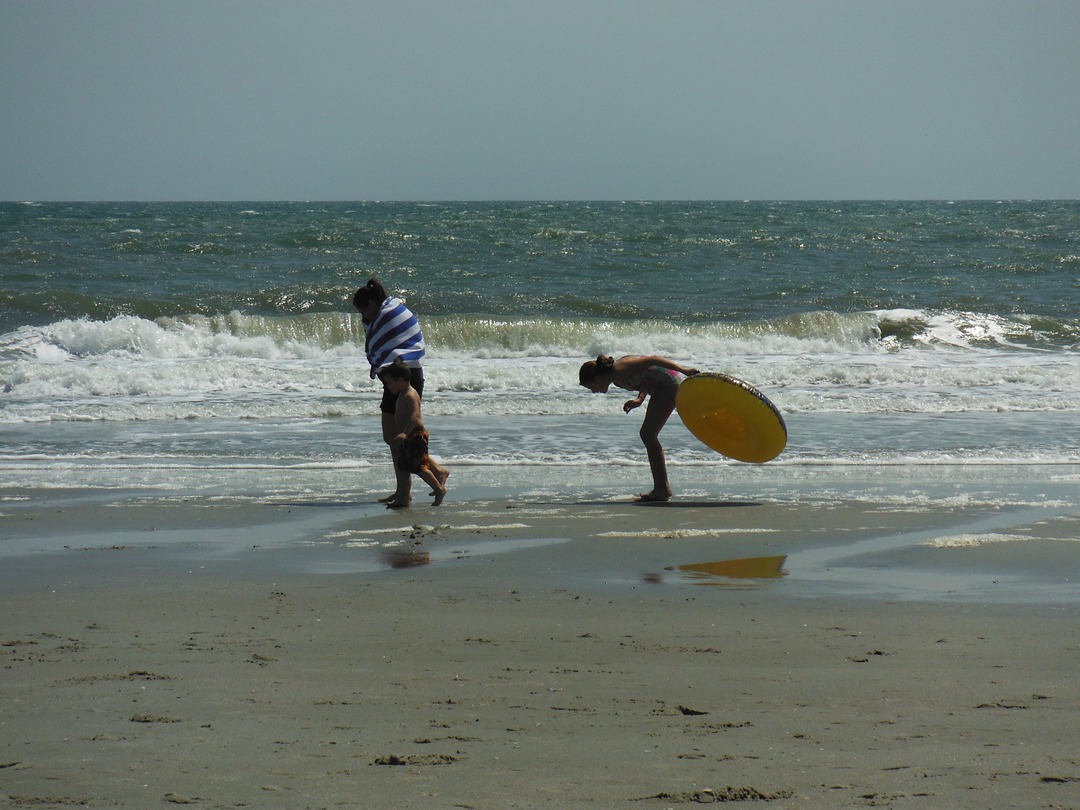 The sun is now at its highest point, at 1:30 pm, over Myrtle Beach. This means the lighting is just right for finding shells in the sand. Beach-goers of all ages can find many varieties of shells and nice pieces of coral. 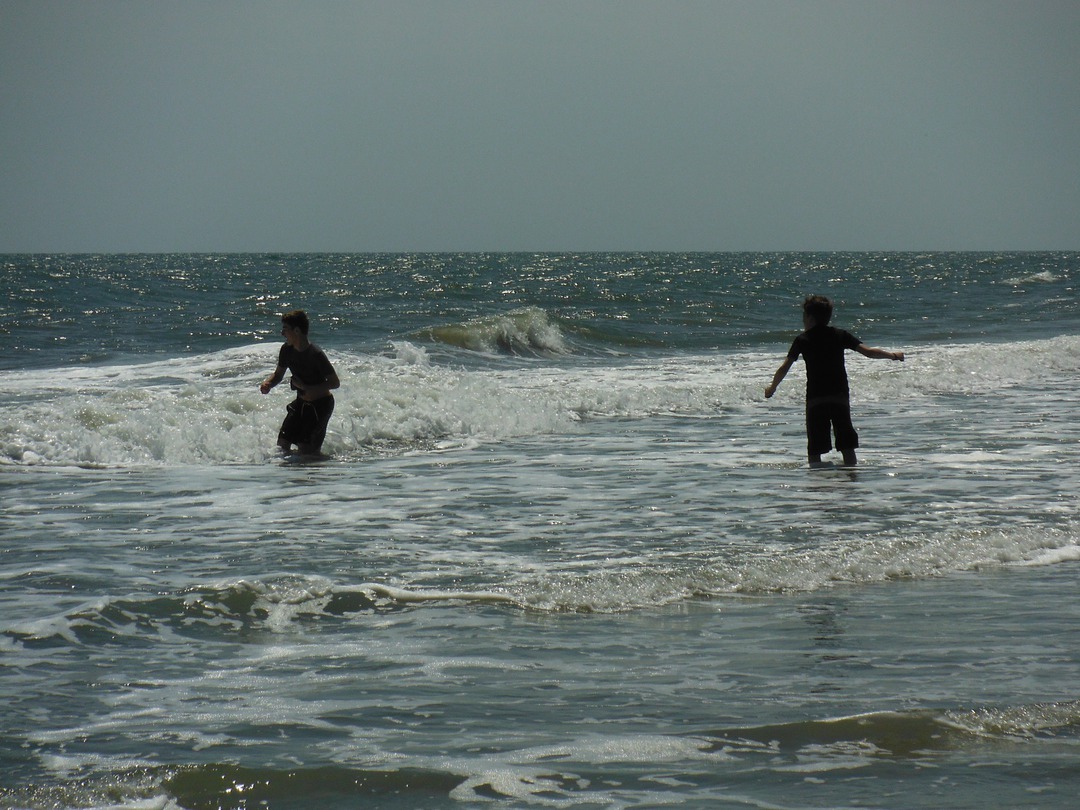 The water is still incredibly cold, but the sun is out, causing the air temperature to rise to a comfortable 66 degrees. Sweatshirts and thick towels are now left behind on beach chairs, and the beach is filling up with both locals and vacationers as the afternoon progresses. 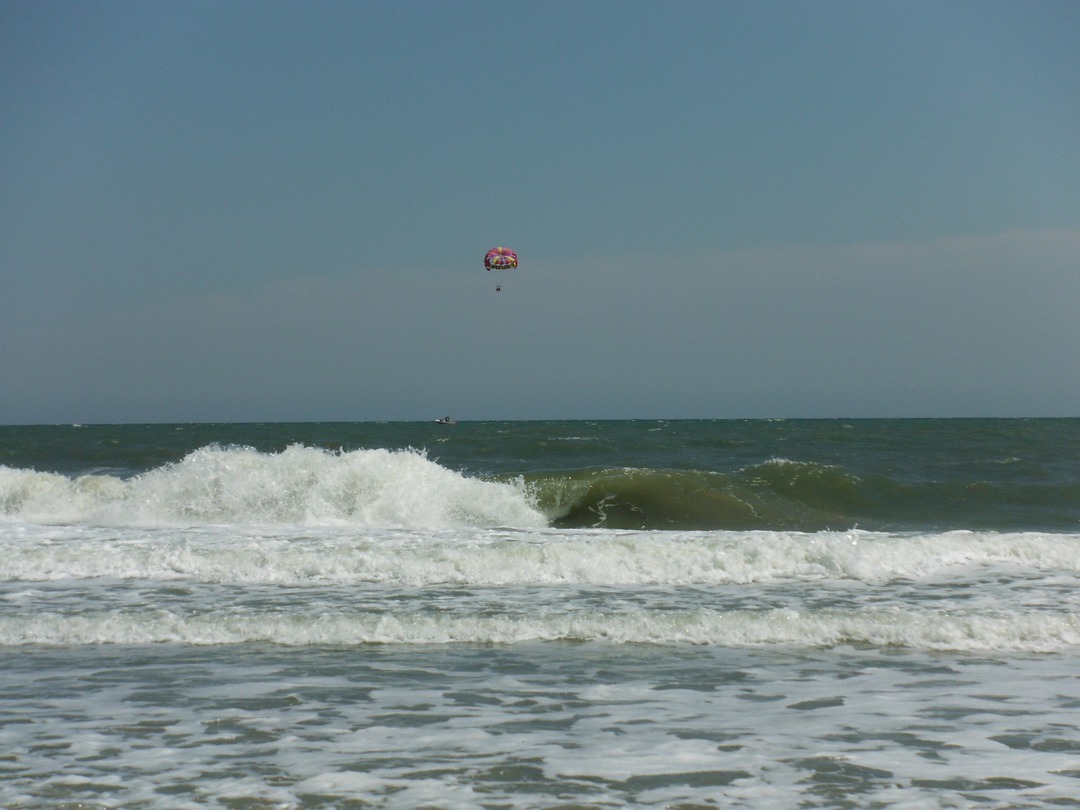 Parasailing adds a lot of color to Myrtle Beach and the winds are not too rough in these nearly cloudless skies. Helicopter rides are another option for getting a great view of Myrtle Beach. 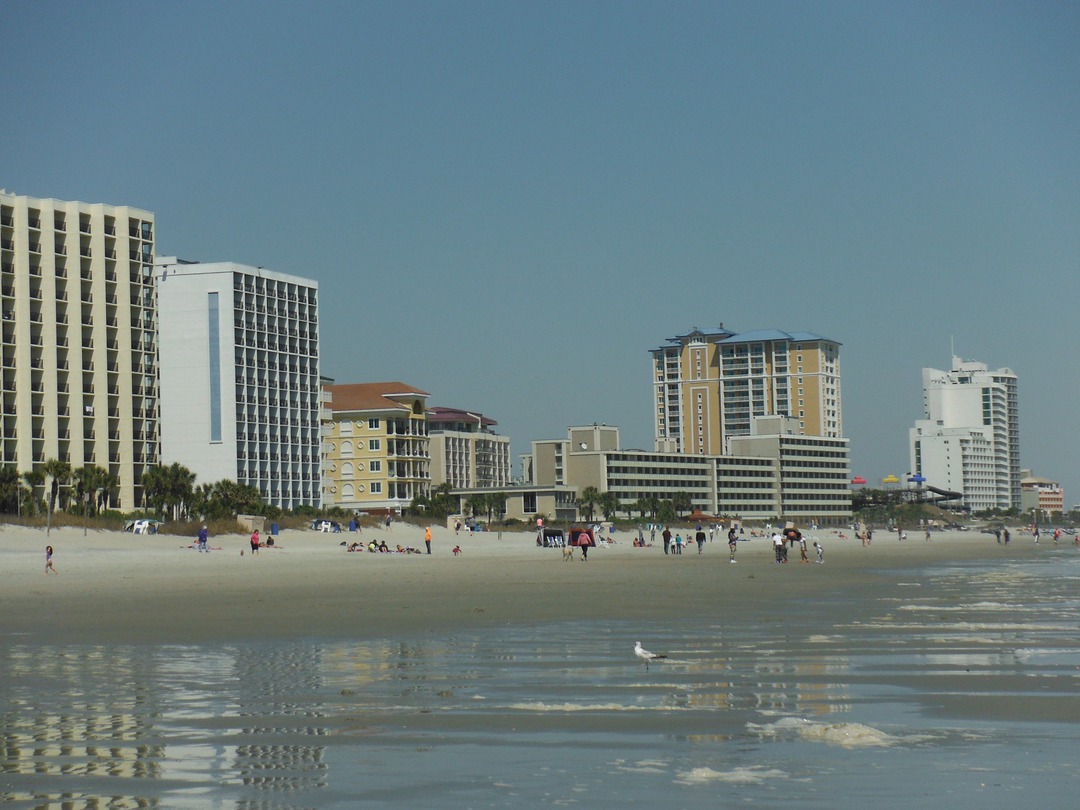 This view of the beachfront hotels looks northward. The beach is about as crowded as it's going to get for the day, and the beach-goers here are relaxed. There are lifeguards present and sunshades for rent. Police officers in golf shirts patrol the beach riding mini atv's. 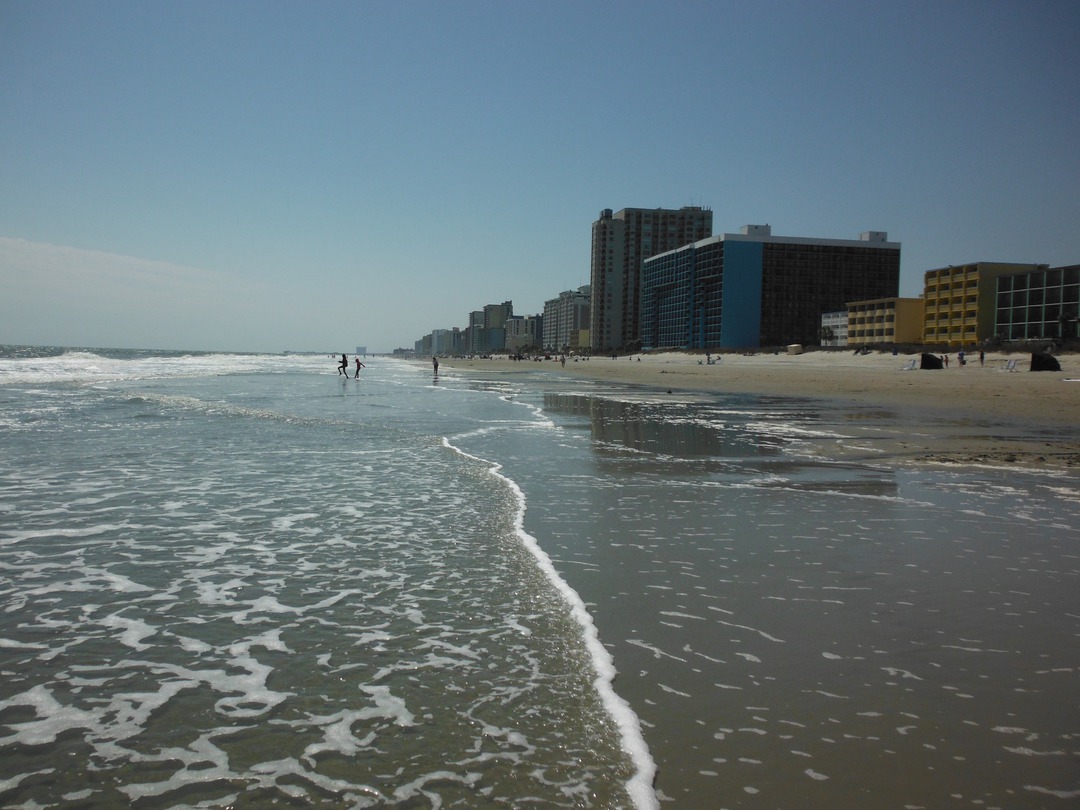 This southward view looks toward the Springmaid fishing pier in the far distance. The sun will set over these hotels in a few hours. 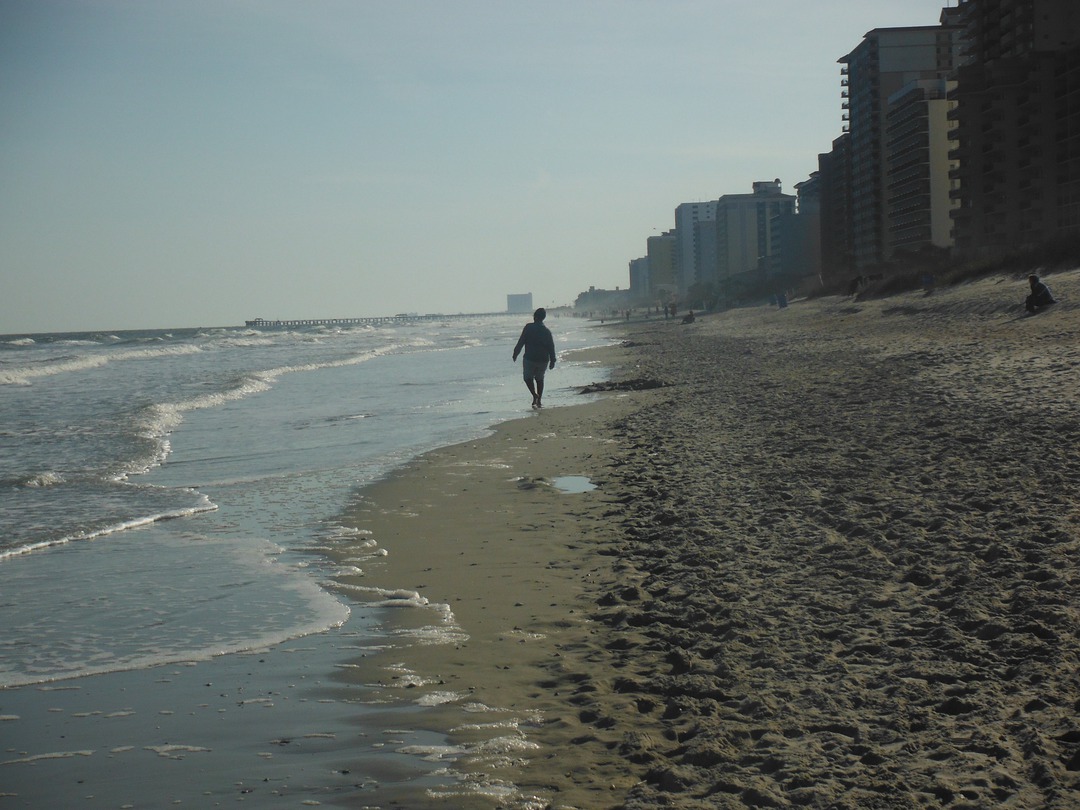 Looking southward, the crowds have thinned out at 4:30 pm on Myrtle Beach's city beach. The families are packing up and leaving for the day while folks stroll the beach alone or in pairs. The tide is coming back in, and this man's footprints will disappear into the ocean in a few minutes. 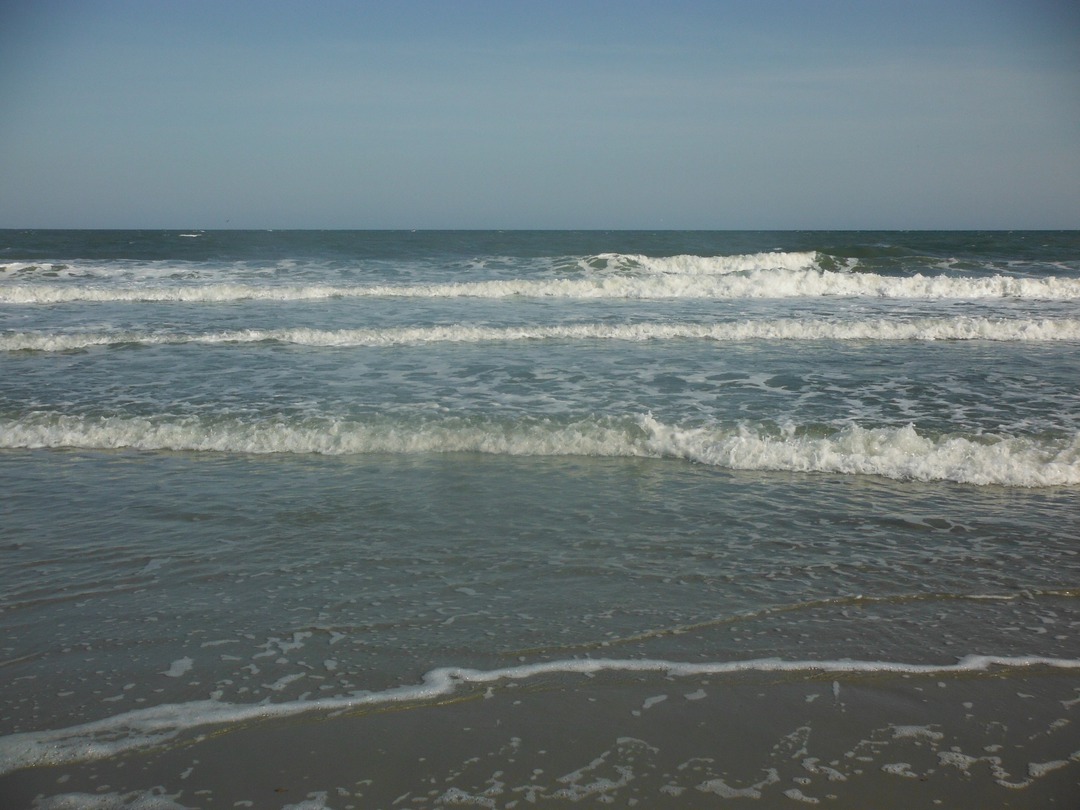 Looking eastward out toward the Atlantic Ocean, the parasails, swimmers and waders have gone home for the day. The temperature has dropped from a high of 66 degrees to the low 60's. The historical average for today is 67. In Daytona Beach, Florida, the high for April 1st was 85 degrees. 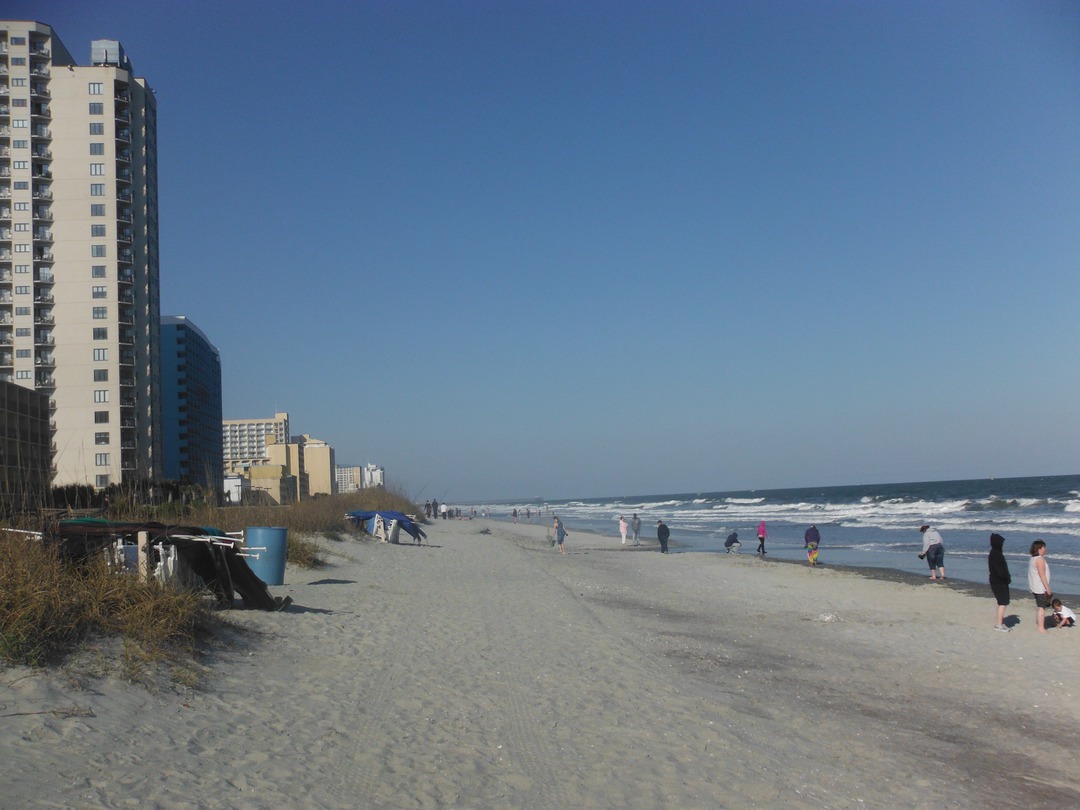 Beach-goers are bundled back up again to take advantage of the last couple hours of good daylight on the Myrtle Beach city shoreline. From sunrise to sunset, April 1st was 12 1/2 hours long. Not long enough, some would say. The Second Avenue pier is in the far distance. 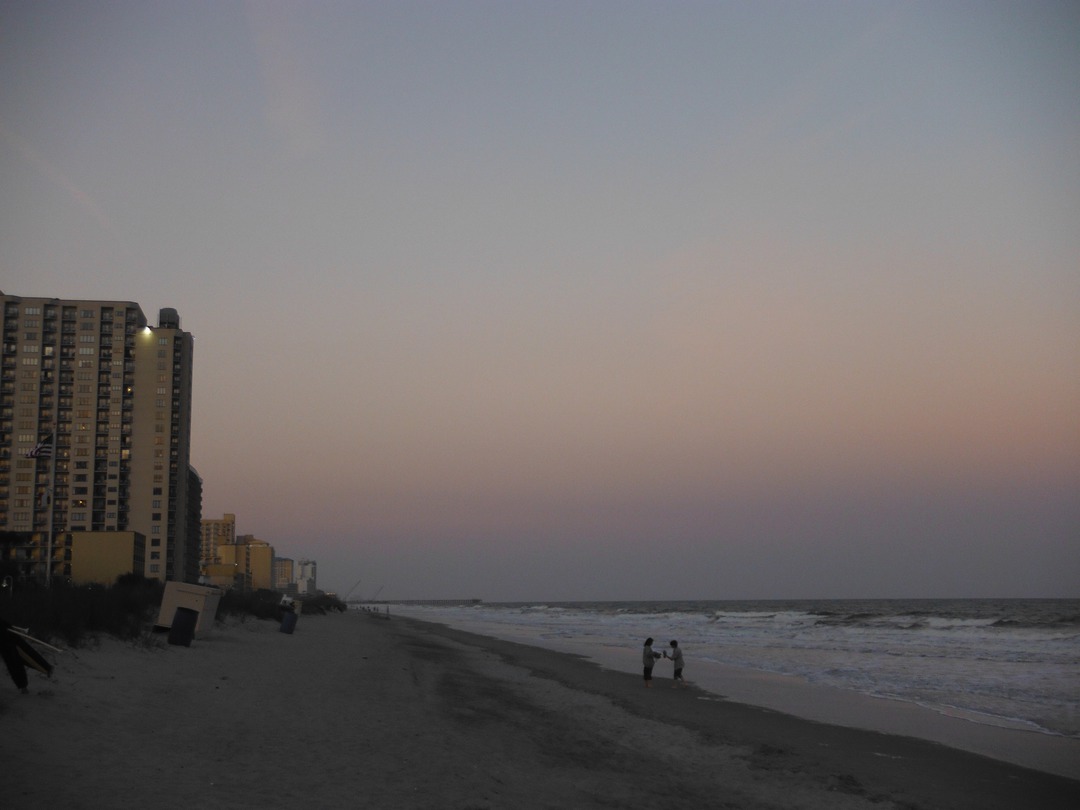 The sun set on Myrtle Beach just nine minutes before this image was taken. The day ends as it began, with the hotels turning their lights on. It's quarter till eight in the evening, during civil twilight. 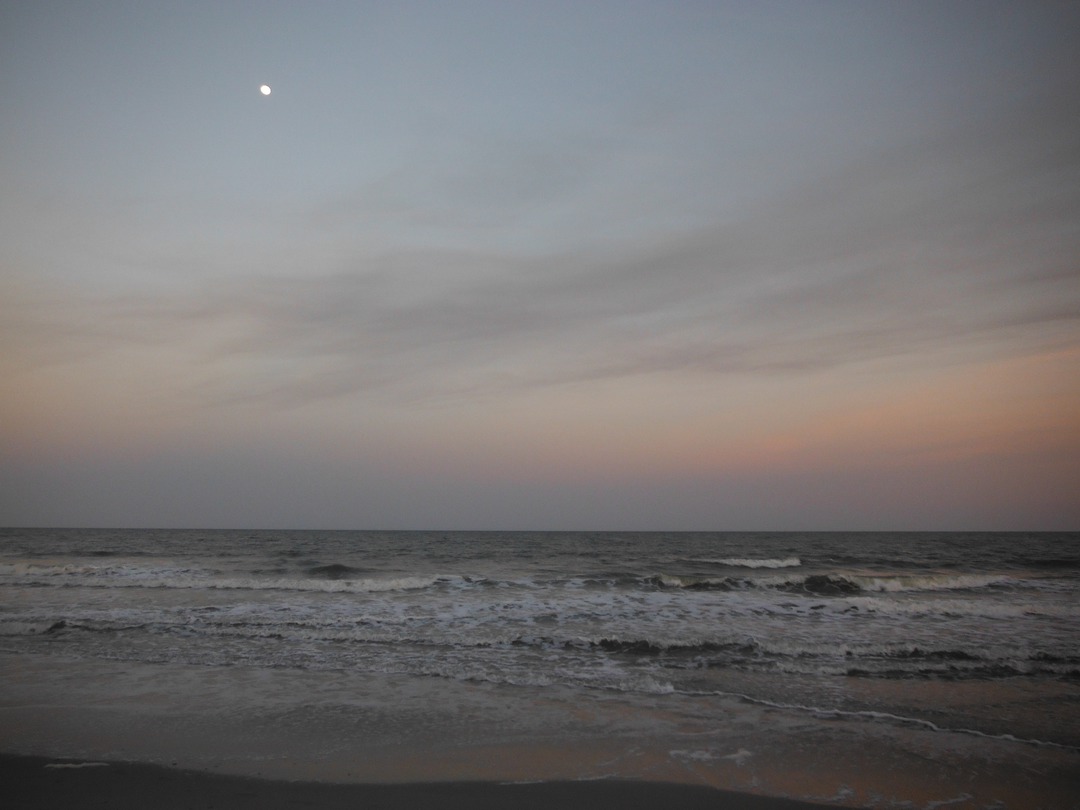 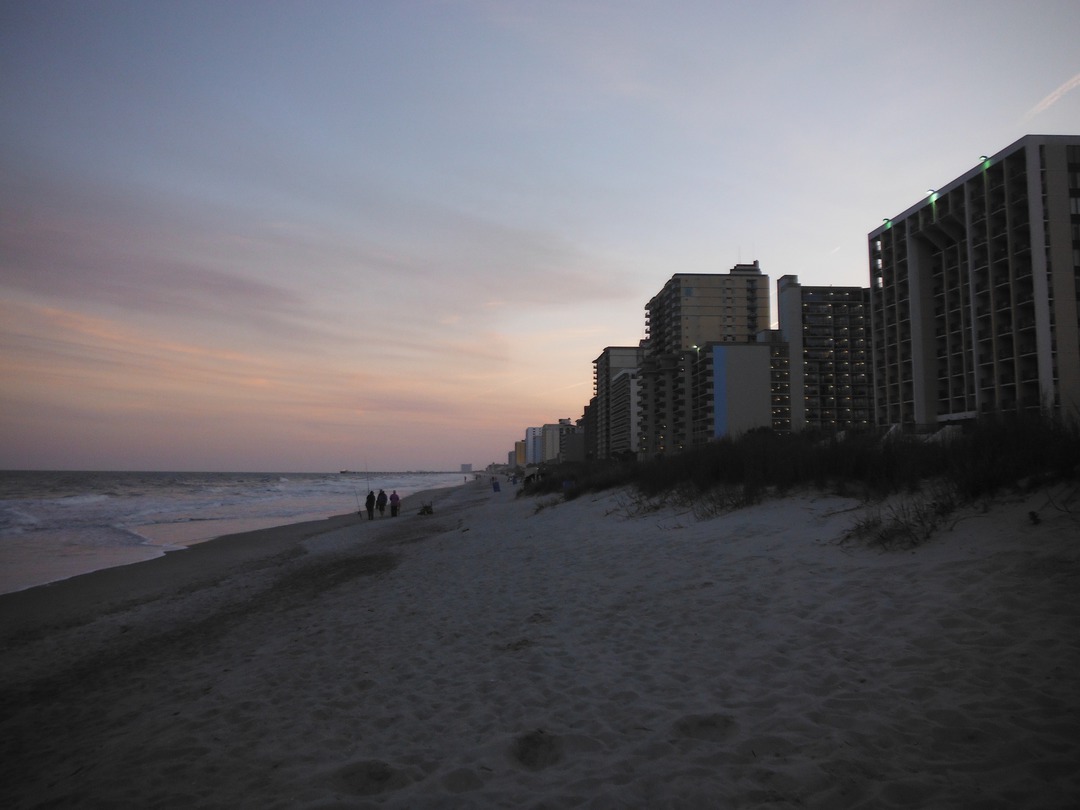 Quite a few fishermen and women appeared this evening after sun disappeared behind the hotels. There's no fee to enter this beach, and it's open all night. 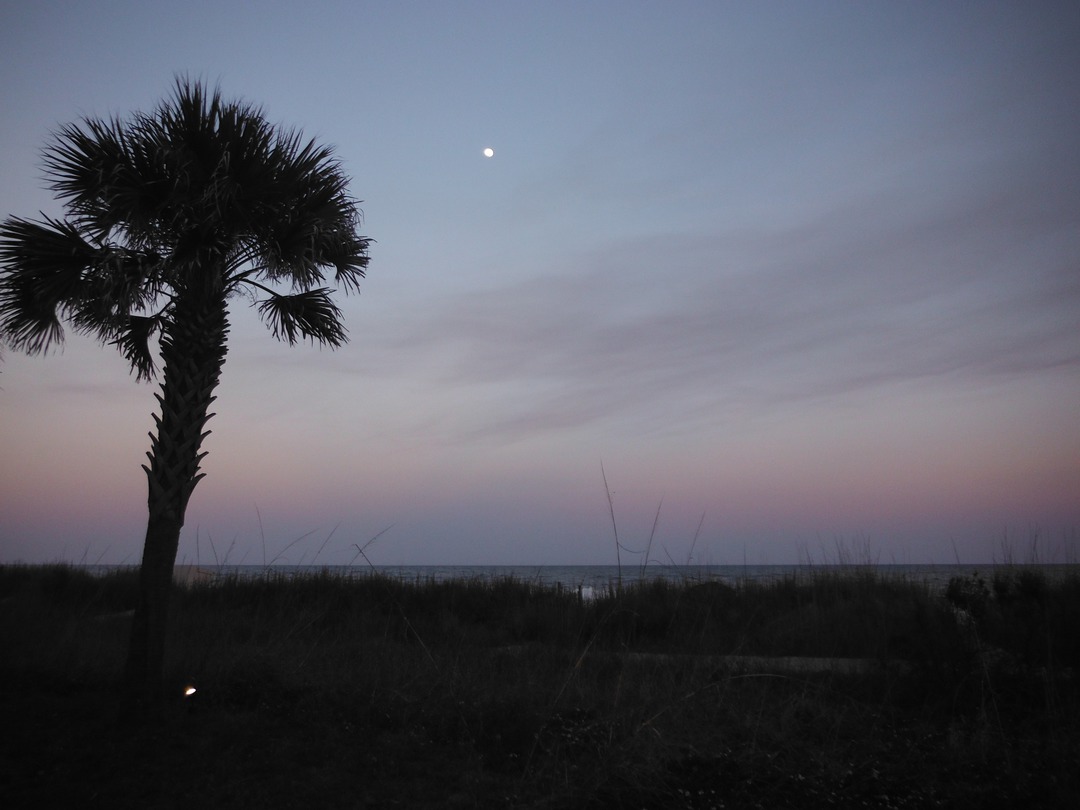 In 1939, the Sabal Palmetto became South Carolina's state tree. This tree, plus a crescent moon, are part of the state flag. The crescent moon has been used by South Carolinians since the Stamp Act protests of 1776.